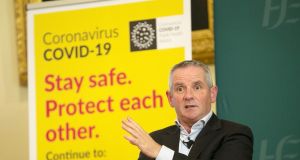 HSE chief executive Paul Reid: The State compares well with other European countries, when measured by the number of tests done per one million of population. Photograph: Sam Boal / Photocall Ireland

HSE chief executive Paul Reid will on Tuesday tell Oireachtas members that Ireland should prepare for further waves of Covid-19 in the months ahead.

In his opening statement to the Oireachtas special committee on Covid-19, Mr Reid states “it is increasingly evident that we can expect and should therefore plan for subsequent waves” of the disease.

Amid admissions to hospital which are “definitely rising”, he will also say that “a difficult winter season, coupled with a resurgence in Covid-19, is the worst possible scenario for our health services”.

“While this is an eventuality that we hope to avoid, it is also a scenario for which we have been carefully planning,” he will say.

He will tell the committee that even with a vaccine “the reality is that we will be dealing with Covid-19 for a long time yet”, and that behavioural and societal changes are needed to manage the pandemic.

Mr Reid will also give an update on the State’s Covid test-and-trace programme, which has been the subject of ongoing commentary since the uptick in cases emerged in recent weeks.

He will say the service is examining ways to bring down the turnaround time for tests, and that the State compares well with other European countries, including Germany, France, Norway and Italy, when measured by the number of tests done per one million of population.

“In order to speed up test notification periods, we are also looking at additional equipment, robots and process methodologies to increase our domestic testing capacity and turnaround,” he will say.

In the past week, the HSE completed 87,940 tests, according to Mr Reid’s opening statement, bringing the total to 1.12 million. Last week, some 15,381 contact tracing calls were completed, the highest number to date.

The committee will also hear that the testing capacity of the State is 100,000 per week, with “surge capacity” of 2,000 a day provided by German labs. He will say that the median end-to-end turnaround time in community settings is currently two days, and that recruitment is ongoing for contact tracing.

The HSE has also begun contacting Government departments about the availability of staff under a temporary assignment scheme first enacted during the early days of the pandemic, The Irish Times has learned.

In a statement, the HSE confirmed it was undertaking this step, although it said its focus was on the recruitment of a dedicated team of 500 people for contact tracing, the first group of whom are expected to be available by the end of this week.

Social Democrats co-leader Róisín Shortall queried why recruitment did not take place during the summer months, when the virus was largely under control.

“It is essential now that staff are not taken away from important areas either within the health service or other critical frontline services,” she said.

“The HSE needs to set out its intentions in relation to its recruitment plans, how many new hires they are aiming to bring in, and what type of contracts will be awarded to these people.”