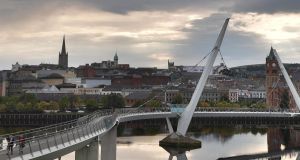 Derry Peace Bridge: in Derry and Strabane, the rates are the highest on the island of Ireland, with an average infection rate over the last seven days of 210 per 100,000 of population as of Sunday. Photograph: Charles McQuillan/Getty

Large family gatherings and lower levels of coronavirus at the outset of the pandemic could be contributing to the increased rates of Covid-19 in Border areas, the North’s chief scientific adviser has said.

However, Prof Ian Young told The Irish Times there was “no clear signal” as to why the number of cases was so high in the Derry, Strabane and Donegal areas in particular. “At the moment it looks as if there’s nothing definite we can identify with the Border, [but] it does seem a considerable coincidence that we’re seeing an issue in a number of Border areas.”

Donegal joined Dublin at Level 3 on the Government’s plan for living with Covid-19 from midnight on Friday; across the Border in Derry and Strabane, the rates are the highest on the island of Ireland, with an average infection rate over the last seven days of 210 per 100,000 of population as of Sunday.

In the North, 187 new cases of coronavirus were confirmed in the 24 hours to Sunday, with 319 on Saturday, bringing the total number of positive tests since the beginning of the pandemic to 10,729, according to the Department of Health in Northern Ireland.

There were no further coronavirus-related fatalities reported on Sunday, leaving the death toll as recorded by the department at 578.

Prof Young said the evidence suggested that in the northwest “there are lots of individual cases, or very small clusters associated with household transmission or community transmission where we can’t identify the source of the infection”, and it was “not down to any single cause or big cluster or outbreak”.

The situation on both sides of the Border, he said, was broadly similar. “Something has happened in the Derry-Strabane-Donegal area which we don’t really understand, and we don’t know whether it relates to people being less careful about the way in which they interact, perhaps because they didn’t experience much infection before, or whether it relates to something that we haven’t identified.”

It was “possible”, Prof Young said, that the earlier focus on Belfast – where the virus was more prevalent – meant that “the messaging has been a bit better embedded in Belfast because people have been more aware of it.

“So few people in the Border regions know somebody who had the virus or has seen its consequences that perhaps people are not quite as careful with regard to behaviours,” he said.

He said it was also possible there were “some differences in how people interact. There may be stronger local communities, larger family connections, people may be more inclined to get together for family events.”

From a public health perspective, he said, “what we really need . . . is everybody in the Derry-Strabane area and other Border areas just to be extra careful about the basic messages.

“Stick to our new household-visiting restrictions and don’t travel across the Border unless it’s really necessary,” he said.

Prof Young said while stricter measures to combat the spread of coronavirus would be a decision for the North’s Executive, it would take at least a further week to see if new rules limiting household visiting had had an effect.

“I think it would be reasonable to wait and see what the effect of our existing measures has been before deciding, but certainly it’s possible in the future everywhere in Northern Ireland that additional restrictions might be necessary,” he said.

The Executive is expected to make a decision regarding a curfew for the North’s hospitality industry on Monday. A decision on whether to impose a curfew in an effort to limit the spread of coronavirus was postponed last week.