Up to 1,000 young people gathered close to Spanish Arch as university term started

Large gatherings of young people in Galway city centre and at house parties have been condemned as an “insanity” by local representatives. Video: @ShifiStarkid/Twitter 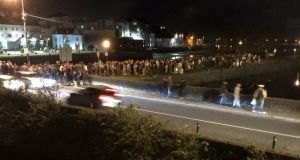 Large gatherings of young people in Galway city centre and at multiple house parties last night have been condemned as an “insanity” by local representatives.

As a consequence calls have been made this morning to restrict access to certain public spaces until the spread of Covid-19 can be brought under control.

As many as 1,000 mostly young people gathered close to the Spanish Arch on Monday night as the university term started while large groups also congregated on Shop Street and other locations around the city.

Footage shared widely on social media platforms showed large numbers of young people at the Claddagh Basin, across the river from the Spanish Arch.

Gardaí were also called to a site close to the River Corrib at the Engineering Building on the NUI Galway campus, locations in Ballybane and Renmore and to at least a dozen house parties in accommodation believed to be rented by students around the city.

NUI Galway described last night’s events as “deplorable” and said it had “repeatedly appealed to the better judgment of our students and reminded them of their responsibilities”.

In a statement the college authorities said they had “worked to ensure this years’ experience of university life is safe, supportive and enjoyable, despite the limitations that the pandemic places on us. NUI Galway leadership is this morning meeting with the Gardaí and Galway City Council about these incidents.”

Shop Street Galway right now.....when there’s about to be an announcement tomorrow that we could be going into further lockdown....a huge slap in the face to everyone trying so hard to social distance and to health workers and to sick friends and family. pic.twitter.com/30Fk5CPbvB

Why are there so many people in #SpanishArch, #GalwayCity? 😰#Galway

It said the “the vast majority of our students are doing their utmost to stay safe and helping to prevent the spread of Covid-19, we won’t hesitate in dealing with any breaches of public health guidelines in line with our Student Code of Conduct (which has penalties up to and including expulsion).”

Independent city councillor Colette Connolly said the events were “an insanity, to be quite honest”.

She pointed out that many older people live in the Claddagh which overlooks the Spanish Arch “are scared and sick and tired of this, they are sick of having to pick up the rubbish left behind. Either we have by-laws that prohibit public drinking or we don’t.”

She said that “young people seem to think they have a God given right to appropriate public spaces for drinking and they don’t. There has to be a recognition that it is insufferable. This is not about being down on young people but these are exceptional times and people have to show a little courage and a little discipline.”

She said limiting access to the Spanish Arch, as happened at the height of the lockdown earlier this year, would be a last resort but would have to be considered “as it looks now like Galway is heading into Level 3”.

Galway Senator Ollie Crowe called for the Army to assist gardaí, saying it would be impossible for them to immediately roster members of the force when incidents such as the riverside gathering happened. Speaking on Today with Claire Byrne on RTÉ Radio One he pointed out that there was an Army barracks in Renmore, “No doubt they would be willing to help restore order,” he said.

The Fianna Fáil Senator called on all the young people involved to immediately self-quarantine and to assume that they had Covid-19 and not to travel home to their families. He also called on them to “atone for their misjudgement” and to respect the public health guidelines.

Fine Gael councillor Eddie Hoare said he had been getting “a lot of phonecalls and messages about it and certainly looked very bad, there was nearly a thousand people down at the Spanish Arch at one point.”

He said that the scenes “certainly do send out the wrong message but I would not like this to be an attack on students and we have to be conscious that we are talking about very young people and many of them would only be starting college for the first time. Having said that everyone needs to change their mind set and we have to work together to do that.”

The president of the NUIG student’s union Pádraic Toomey condemned last night scenes and said only a “small minority” of the student body in Galway had been involved.

“We have 30,000 students in the college and most of those people are following public health guidelines,” he said.

He pointed out that outdoor drinking at the Spanish Arch had been a common sight throughout the lockdown even when the college was closed. “We have a duty to point out when something is wrong and this is wrong.”

He said the main focus of the student’s union this year would be on supporting “people who are struggling to cover the costs of their education and can barely afford to pay their rent never mind buy drink.”