Ireland will not be Brexit ‘collateral damage’, says Coveney in Washington 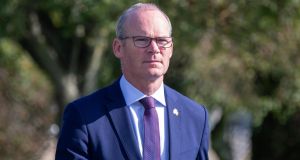 Minister for Foreign Affairs Simon Coveney: ‘We would not have had peace in Ireland if it hadn’t been for the United States in terms of interventions, support, encouragement and ongoing involvement.’ Photograph: Colin Keegan/Collins

Ireland will not become “collateral damage” on Brexit, Minister for Foreign Affairs Simon Coveney has warned as he kicked-off a series of engagements in Washington DC on Tuesday.

In a discussion with the Aspen Institute, Mr Coveney said that the recent intervention by senior US figures in the Brexit debate was “a reminder that the United States regards the Irish peace process as one of US foreign policy success stories over the last three or four decades.”

“We would not have had peace in Ireland if it hadn’t been for the United States in terms of interventions, support, encouragement and ongoing involvement . . . in politics in Northern Ireland and indeed in the Republican of Ireland.”

He said that several US political figures had at times intervened with the British government to say: “we respect your decision on Brexit, but we also expect you to respect the Good Friday Agreement.”

The message from the US that a UK-US trade deal would not happen if the Irish peace process is undermined had “landed in Westminster,” he told the forum. “It has made a number of people quite uncomfortable. It has resulted in the British foreign secretary Dominic Raab coming to Washington in the last few weeks to try and explain the British government’s approach.”

“We are a friend of Britain, just like the United States is. We have a special relationship with the UK. It’s a complicated one, it is a tragic one at times, but it’s a hugely special and hugely close one,” he said. “We want to work with Britain to solve these problems, but we will not allow Ireland and relationships on the island of Ireland to be collateral damage.”

Mr Coveney also pushed back on the prospect of a Border poll in the near future, appealing to Irish-America to support the Irish government’s efforts to “solve one problem at a time”.

Responding to a question on Irish unity, he criticised those who conflate the issue of Irish issue with Brexit.

“I think that that argument is flawed, and has made finding solutions to the Brexit challenges much more difficult. We have a solution on Brexit. It’s in the Irish protocol . . . I am a constitutional nationalist. I would like to see the unification of Ireland in the future but I also recognise that there is a process that we all need to follow, of reassurance, of bridge building of reaching out to communities that may see themselves as very vulnerable to that change.”

“It is important to solve one problem at a time,” he added.

Speaking about the future of the European Union, Mr Coveney said he would like the EU to be “more assertive and clearer in terms of global and international messaging,” adding that it is “regrettable that the EU and the US take a different approach to a lot of foreign policy issues in recent years.”

Foreign policy in the United States in the last few years has been about “transactional diplomacy and bilateralism” in relation to foreign policy, he said, adding that the absence of the US from international bodies “allows other powerful actors globally to fill that vacuum.”

“We want to see a US presence in all these multinational fora,” Mr Coveney said, as he outlined Ireland’s priorities as it assumes a seat on the UN Security Council in January.

Mr Coveney was speaking ahead of key meetings in the White House and on Capitol Hill.

He is due to meet with national security advisor Robert O’Brien, where it is expected that Ireland’s role as a headquarters for many tech companies and issues over data privacy are expected to be discussed.

Later on Tuesday, Mr Coveney will participate in an event hosted by Georgetown University which will highlight Ireland’s links with Frederick Douglass, the abolitionist who visited Ireland 175 years ago.

On Wednesday he will meet with senior Republican and Democratic figures including Senator Chris Murphy, Congressman Richard Neal who chairs the Friends of Ireland caucus.

Ms Pelosi warned Britain earlier this month that Congress will not ratify a trade deal with Britain if the Good Friday Agreement is undermined.