Trump and Biden prepare to face off in first presidential debate 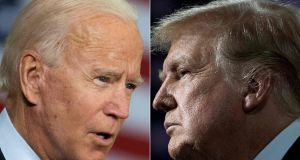 It will be the first time the Democratic presidential candidate Joe Biden, left, and US president Donald Trump face each other on the debate stage. Photographs: Jim Watson, Brendan Smialowski/ AFP via Getty

US president Donald Trump and his Democratic rival Joe Biden are due to arrive in Ohio on Tuesday, ahead of the first presidential debate of the 2020 election season.

The candidates will take part in a live 90-minute debate in Cleveland, Ohio on Tuesday night that will be televised across most major networks exactly five weeks before the presidential election. It will be the first time the two men will face each other on the debate stage and the first of three scheduled debates.

The coronavirus pandemic has changed several aspects of the event that is a staple of the American election calendar. Only a small number of ticketed guests are attending the one-on-one between the two men, which will be moderated by Fox News presenter Chris Wallace.

Still, millions of Americans are expected to tune into the event that will begin at 9pm eastern time (2am Irish time) and is traditionally the moment in the presidential campaign when many voters begin to turn their attention to the election in earnest.

Although polls indicate that many Americans have already made up their minds about who to vote for on November 3rd, and early voting has already begun in some states, Tuesday night is an opportunity for both candidates to sway undecided voters.

In an unprecedented move by a presidential nominee, Mr Trump has called for both men to take a drug test before the debate.

“I’m willing to take a drug test, and he should too,” Mr Trump said at a press conference in the White House on Sunday night. Earlier he questioned his rival’s mental acuity. “His Debate performances have been record setting UNEVEN, to put it mildly. Only drugs could have caused this discrepancy???,” he tweeted.

Both men are the oldest ever presidential candidates to have been nominated by either of the main two political parties.

Explosive revelations in a New York Times investigation, which claims that Mr Trump paid only $750 in federal taxes in the year he was elected president, are likely to hang over the debate. So too will the controversial decision of Mr Trump and the Republican-controlled Senate to press ahead with the confirmation of a new supreme court justice following the death of Ruth Bader Ginsburg earlier this month.

Mr Biden is likely to focus on the court’s role in adjudicating on the Affordable Care Act, the policy otherwise known as Obamacare, in a bid to criticise Republicans’ healthcare policy. He is also likely to link this to Mr Trump’s handling of the coronavirus pandemic, which has claimed more than 200,000 lives in the United States.

In a press conference at the White House on Monday, Mr Trump sought to highlight the progress made on testing in the United States, announcing the distribution of 150 million point-of-care tests developed by Abbott across America. The tests, which had previously been announced in late August, will provide a result in less than 15 minutes. Mr Trump hailed what he described as the “most advanced testing system in the world”.

“There’s never been anything like this...We’ve marshalled all of America’s resources to achieve these unparalleled results,” he said, stating that America had tested far more than any other country, including India, the entire European Union and all the Latin American countries combined.

He also noted that the fatality rate had fallen 85 per cent since April.

The candidates are also expected to be questioned during the debate on the issue of racial injustice, police reform and social unrest after widespread protests over the summer following the death of African-American man George Floyd in police custody.