Coney Barrett meets Pence and senators ahead of confirmation hearing 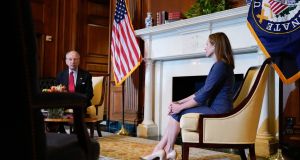 US vice-president Mike Pence described Amy Coney Barrett as “an extraordinary American” and “someone of great character” as the supreme court nominee began meeting senators on Tuesday ahead of her confirmation hearing.

Speaking alongside Ms Barrett on Capitol Hill, and Senate majority leader Mitch McConnell, ahead of a full day of private bilateral meetings with key Republican senators, Mr Pence said that he looked forward to a Senate vote on Ms Barrett’s confirmation “in the near future”.

Barret, a federal judge, a former law professor and the 48-year-old mother of seven nominated by president Donald Trump on Saturday to replace the late justice Ruth Bader Ginsburg on the supreme court, was described by Mr Pence as “someone of great character, of great intellect, who has a judicial philosophy that will uphold the Constitution of the United States”.

Mr McConnell said he was “glad to get the process started”, but did not respond when asked if he expected a confirmation vote before November’s election.

Supreme court nominees typically meet with senators privately following their nomination by the president and before the official confirmation hearing that is held by the senate judiciary committee. But several prominent Democratic senators, including Senate minority leader Chuck Schumer, have refused to meet Ms Barrett. “Why would I meet with a nominee of such an illegitimate process and one who is determined to get rid of the Affordable Care Act?,” Mr Schumer said, referring to the healthcare policy most commonly known as Obamacare.

Ms Barrett was scheduled to meet with nine senators on Tuesday – all Republican – including Mr McConnell and Senate judiciary committee chairman Lindsey Graham. Both men opposed former president Barack Obama’s nomination of a supreme court justice in 2016 following the death of Antonin Scalia because it was an election year, but have vowed to press ahead with Ms Barrett’s confirmation.

The confirmation hearing is to begin on October 12th, with the judiciary committee expected to vote on Ms Barrett’s nomination on October 22nd. That sets up the prospect of a full Senate vote the week before the US’s presidential and congressional elections on November 3rd.

With Republicans controlling 53 seats in the 100-seat chamber, Mr Mc Connell is expected to have the required majority to confirm Ms Barrett.

Democrats are privately discussing how best to handle Ms Barrett’s hearing, with senators so far in their public comments focusing mostly on her position on the Affordable Care Act. She has criticised a decision of the supreme court in 2012 to uphold the Act.

Mr Trump accused Democrats of “playing the religious card” – Ms Barrett is a devout Catholic – and fuelling anti-Catholic sentiment, during a press conference on Sunday.

“On the religious situation with Amy, I thought we settled this 60 years ago with the election of John F Kennedy. Seriously, they’re going after her Catholicism,” he said. Mr Trump’s Democratic opponent Joe Biden is a practising Catholic and would be the first Catholic president since Mr Kennedy if he wins November’s election. But Republicans are trying hard to appeal to the Catholic vote as the election campaign enters its final weeks, highlighting their party’s anti-abortion credentials.

Meanwhile, Republicans on the House of Representatives ways and means committee called for a congressional investigation into the New York Times report on Mr Trump’s taxes, which asserts that the president paid only $750 in federal taxes in 2016.

Congressman Kevin Brady, the top Republican on the committee, said it was possible “that a felony crime was committed by releasing the private tax return information of an individual – in this case the president’s”.

The New York Times has defended its reporting and underlined the importance of protecting its sources.