‘We must avoid a tragedy’: European Council head on Covid-19 mistakes

The delivery of potential COVID-19 vaccines to European Union countries could begin in earnest in April, the head of the European Commission Ursula von der Leyen has said. Video: EU Council 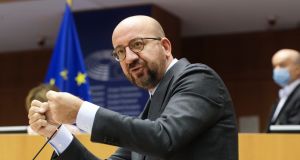 European Council president Charles Michel: ‘Within the space of just a few weeks, the situation has escalated from worrying to alarming.’ Photograph: Olivier Hoslet/EPA/POOL

The email dropped late on Tuesday night: “A word from the president.”

This was a missive from Charles Michel, the European Council president who has taken to sharing his thoughts in the form of a newsletter. A former Belgian prime minister, Michel is the man who has chaired the meetings of the European Union’s national leaders since December, with the task of nudging them towards consensus. Since March, that has meant a lot of pandemic co-ordinating: on re-opening borders, on sponsoring vaccines, on helping the economy.

The subject of his letter? It’s all gone wrong.

“Within the space of just a few weeks, the situation has escalated from worrying to alarming. Now we must avoid a tragedy,” Michel wrote. “This was not how things were supposed to turn out.”

It comes after a week in which 1.1 million new Covid-19 infections were logged in Europe alone. An average of 1,000 Europeans died of the virus each day, a rise of one third compared to the week before. Hospitals across the continent began warning that they had no beds left, and that too many staff were sick with the virus to care for the patients they had.

How had this happened?

“When in late spring we succeeded in drastically slowing the speed at which Covid-19 was spreading, the priority became the recovery of economic, social and cultural life,” Michel wrote.

“This choice needed to be backed up by a robust testing and tracing policy. . . At European level, this plan of action has not achieved the desired results.”

In other words, once citizens brought infections down to low levels by staying at home for months, their governments failed to put in place adequate measures to stop them rising again.

Instead, leaders pinned their hopes on the rapid appearance of a vaccine and focused on addressing social and economic concerns, Michel wrote. On top of this, “fatigue and a deceptive feeling of getting back to normal” allowed the virus to begin circulating again.

Nowhere was this deceptive feeling of normality more evident than in Brussels itself.

Early on, top officials and political organisations in the city reverted to old habits of presenteeism and began requiring staff to be present in the office again, even for jobs that are easily done remotely. It was normal to spot MEPs having working lunches with groups of colleagues inside busy restaurants. National delegations began holding events for journalists that could only be covered in person, in rooms with windows that do not open. Objections – and there were objectors – were steamrolled over.

It should have come as little surprise that infections among officials and their staff shot up from September on. It seemed every few days a new prominent person tested positive. Top officials were in and out of quarantine like a jack-in-the-boxes. It began to disrupt meetings: first a meeting of national leaders had to be delayed because Michel himself was in isolation, then attendees began pulling out at short notice.

Nevertheless, a “business as usual” mood prevailed. This was “living with the virus”, we were told. Hand sanitiser was ubiquitous. Rapid tests were available – for the VIPs. Everyone wore masks, albeit along with the self-defeating practice, endemic among politicians, of removing them in order to speak.

It was common to hear wishful talk that perhaps the virus had somehow become weaker or that people had perhaps become immune. There was a widespread sense of invulnerability. Politicians and the successful people who surround them do not view themselves as frail. “Even if I got it,” many seemed to reason, “I would surely be a mild case.”

This changed when Sophie Wilmès went into intensive care. Wilmès was prime minister of Belgium until October 1st, and led the country through the pandemic, attending all those meetings with Michel and her EU counterparts. She was serving as foreign minister and deputy prime minister in Belgium’s new government when she was admitted to hospital. She tweeted: “no one is safe” from the virus.

That someone aged 45 with no apparent medical conditions can end up in intensive care should not have been news to Brussels. And yet the bubble was still shaken that it had happened to one of their own. Simultaneously, the sheer number of infections was starting to strain even the highest levels. The European Commission revealed its testing service could now only cater for priority staff.

Then chancellor Angela Merkel put her foot down. Germany holds the rotating presidency of the EU Council. Two days ago a spokesman announced that all physical meetings – except for the absolutely essential – were off.

The national leaders are to meet over video conference on Thursday. “The Covid-19 pandemic is intensifying across member states,” a letter convening the meeting read. “We are all facing renewed pressure on our societies, economies, healthcare systems and public morale.”

On the agenda are testing, vaccines, and “the scope for facilitating mutual assistance between member states”. In plain English, what that last item means is: some member states are running out of hospital beds. Can anyone help?