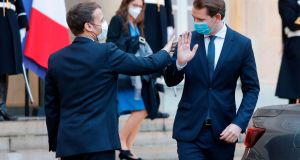 Reporting on Europe can be a cacophonous experience. On a typical day, Covid-19 news will compete with Brexit developments, against international geopolitics and the latest fight between big tech companies and EU regulators. But the hubbub is rarely as dissonant as it was on Tuesday this week, a day when EU leaders simultaneously lauded Muslim immigrants and raised suspicions about them.

Brussels would prefer that the “Pfizer vaccine” that has elevated hopes of an end to the pandemic should be known as the “BioNTech vaccine”. BioNTech is the German company that developed the key messenger RNA technology behind the vaccine and is working in partnership with the United States-based pharmaceutical giant to develop and produce it.

The founders of the company are a husband and wife team, Drs Ugur Sahin and Ozlem Tureci, two scientists of a Turkish background so dedicated to their work that on the day of their marriage they returned to the lab after their wedding ceremony.

The vaccine’s promising result in an initial trial set off a rush by politicians to take credit and associate themselves with the good news story. As officials from the administration of Donald Trump would have it, this was a US victory. They falsely claimed Pfizer had received funding from the US government’s Operation Warp Speed vaccine acceleration programme. It had not, but BioNTech did get funding from the German goverment.

In Germany itself, where studies have shown that people of Turkish descent are discriminated against in both education and employment, the story of Drs Sahin and Türeci was immediately co-opted for use in the country’s long-running debates about immigration. Where Brussels is concerned, the vaccine is a European win. In statements from the European Commission, it’s pointedly described as “German company BioNTech” with “Pfizer” mentioned second.

On the very same day that the commission was proudly announcing it had secured 300 million doses of the vaccine, it also announced that it would soon present a “new European agenda on combating terrorism”, including an “action plan for integration and inclusion” of migrants.

Macron and Kurz have teamed up to push the EU to adopt an anti-terror strategy in the wake of a string of attacks in Vienna, Nice and the outskirts of Paris. Their endeavour has given a boost to some sensible proposals that had already been agreed but never finalised, such as data-sharing and more co-operation between police forces.

But extremely questionable suggestions have emerged from this debate too. Some are farcical, like the call of European Council president Charles Michel for “a European Institute to train imams” that should be “set up as soon as possible” – a hubristic notion suggesting an image that would be at home in the pages of Charlie Hebdo.

Perhaps more concerning is the call by Austria’s Kurz for the creation of a “criminal offence called ‘political Islam’” to “take action against those who are not terrorists themselves, but who create the breeding ground for such”. Kurz suggested this could be part of a package allowing mosques to be shut down and the introduction of an “imams register”.

Proposals like this suggest state overreach, and the risk of indiscriminate targeting of a marginalised minority. But they should perhaps be understood as political messaging more than straightforward policy ideas: an attempt to compete with far-right anti-immigration groups by adopting their rhetoric.

The very bundling of the question of migration together with terrorism and security policy is in itself an adoption of far-right assumptions, which makes a stigmatising assertion about a large and diverse group of European citizens who largely have nothing to do with extremism or violence.

Kurz is a long-time hardliner on immigration who has only been recently chastened by his coalition with the Green party. Macron’s shift to this rhetoric is newer, and comes as he transitions from the great new hope of European centrist politics into a figure who can compete with the far-right Marine Le Pen in the elections of 2022.

To do so, he has set off what the New York Times has described as “a broad-brush crackdown on Islamists and some Muslim organizations, with language that appeared to conflate Islam (the religion) with “Islamism” (an ideology that has sometimes led to violence).”

In a recent opinion piece, the Financial Times’s Brussels correspondent Mehreen Khan warned that Muslims would need to be Macron’s strongest allies in any fight against extremism, and that such policies and language risked counter-productively alienating them.

This piece can no longer be read. It was retracted whole by the newspaper following a complaint by Macron himself, who pointed out a misquotation, which in the circumstances is a highly ironic censorious result.