About 10,000 take part in demonstration against coronavirus-related restrictions 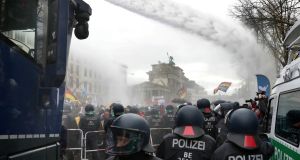 Police deploy water cannons at a protest rally in front of the Brandenburg Gate in Berlin, German. Photograph: Michael Sohn/AP

Berlin police used water cannon at the Brandenburg Gate on Wednesday to disperse an aggressive protest against new Covid-19 powers being debated inside the adjacent Reichstag parliament building.

Amid angry jeers and jostling, police deployed the cannon to disperse about 10,000 protesters, many of whom ignored demands to wear masks and observe social distancing.

As police helicopters hovered overhead, some demonstrators lobbed fireworks and flares towards officers in riot gear. The third iteration of Germany’s bill “to protect the population in an epidemic situation of national consequence” gives additional legal footing to all pandemic restrictions, from lockdowns to mask-wearing in public.

Angry protesters blowing whistles gathered near the parliament, and echoing the far-right Alternative für Deutschland (AfD) inside the Bundestag chamber, compared the new law with the Enabling Act of 1933 that opened the door to Hitler’s Nazi takeover and the end of Germany’s inter-war democracy.

“Over there, sitting in the German Bundestag, are marionettes who do what the pharmaceutical industry demands of them,” said Hansjörg Müller, an AfD parliamentarian, to the crowd while standing before a Gandhi poster and a sign reading “truth frees”.

Waving signs and wearing masks reading “Merkel Muzzle” and “Pandemic of Lies”, protesters were held back from the Reichstag building, seat of the Bundestag, by 2,000 police acting in line with a court order.

Officers were anxious to avoid a repeat of scenes in late August, when far right Covid-19 conspiracy theorists slipped past a light police guard and rushed up the Reichstag steps to the main entrance. Those images went around the world and were condemned by President Frank-Walter Steinmeier as “an attack on the heart of German democracy”.

“Unfortunately our order to wear a mouth-nose covering had no effect,” said Berlin police on Twitter, explaining their decision to intervene.

After three hours, and more than 200 arrests for breaches of public order, the demonstration was declared over by police at noon, just as the bill had its final reading.

Following an afternoon vote in the Bundesrat, the upper chamber of the 16 state parliaments, it becomes law upon signature by Mr Steinmeier.

The speed at which the law was passed – weeks rather than months, in a haze of amendments and rewrites – has attracted criticism from protesters and some opposition politicians. While the new law gives the Bundestag the ability to limit the powers of the Merkel administration, many are wary of a paragraph giving the federal government the power to impose “necessary protective measures”.

Some lawyers and courts have already expressed unease at the term, which they view as too broad, and are readying legal challenges. The government says the laws are far-reaching but time-limited, and require regular parliamentary consultation.

Foreign minister Heiko Maas hit back at those drawing parallels between the Covid-19 law and the 1933 Enabling Act, which allowed the Nazis bypass parliament to legislate.

“Of course everyone has the right to criticise the measures, our democracy thrives through the exchange of different opinions,” he wrote on Twitter. “But whoever relativises or trivialises the Holocaust has learned nothing from our history.”