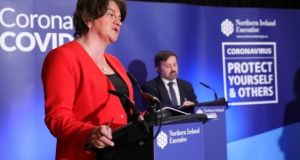 The highest incidence is in the Armagh, Banbridge and Craigavon area with 243 cases per 100,000. File photograph: Kelvin Boyes/Press Eye/PA Wire

On a day when 11 more Covid-19 deaths were recorded in the North Mr Johnson said the British government would hold talks with the Northern Executive about plans to roll out mass testing across the UK.

He said such testing was a “powerful tool” in the battle against the virus.

The health minister Robin Swann at an evening press briefing on Wednesday said he held discussions on the issue with British health secretary Matt Hancock in recent days and rapid mass testing now was closer to becoming a reality.

Between such testing and the prospects of Covid vaccinations coming on stream he said these were “all grounds for real optimism”.

Prof Young said 90 per cent of the North’s 1.8 million population would have to be tested repeatedly for such testing to be effective so it was also “important to be aware of the limitations of the approach”.

Dr McBride indicated that such testing could be used on students in Britain who were planning to come home for Christmas. It could also be used to assist healthcare workers.

Despite the optimistic comments Mr Swann again intimated that further restrictions may have to be introduced before Christmas to try to limit the spread of the virus.

He did not provide specific detail of what those restrictions might be but said he is to present a paper to the Northern Executive on Thursday “setting out a number of options” and “possible interventions and initiatives to get us through the difficult weeks ahead”.

He said he had been clear that there “will be a need for more restrictions between now and Christmas if we’re to get our health service through the winter pressures”.

“These can help us achieve a better Christmas season as we look forward to a much better new year,” he said. “There is real hope on the horizon.”

The 11 coronavirus deaths recorded on Wednesday afternoon took the North’s death toll to 889.

Bed occupancy in Northern Ireland hospitals now is at 102 per cent with 452 patients receiving Covid treatment. Of these 44 are in intensive care units with 37 on ventilators.

The overall 7-day Covid figure for Northern Ireland is 188 cases per 100,000 of population.

Mr Swann also announced that a new facility at Whiteabbey Hospital in Co Antrim is to open on Friday to assist Covid patients well enough to leave acute hospital care but who would benefit from a period of rehabilitation that could not be provided at home.

The service will start with 23 beds and when fully operational will have 100 beds.

“The new Whiteabbey Nightingale should also ease pressure on acute hospitals by facilitating discharges of people who are no longer acutely unwell, but need further support before hospital discharge,” said Mr Swann.

Meanwhile, the Northern Ireland Statistics and Research Agency (Nisra) reported on Wednesday that this year up until September 30th there were 808 deaths in Northern Ireland where Covid-19 was the underlying cause.

It reported that up to that date there were 902 deaths where the virus was mentioned on the death certificate but of these it was found that 89.6 per cent of them – 808 – were cases where Covid-19 was the underlying cause.

The health department figures differ from the Nisra statistics in that they mainly relate to deaths in hospital and patients who had previously tested positive for the virus.

Nisra’s figures go wider in that they relate to death certificates in the wider community where Covid-19 was recorded as a factor in the death.