French transport strikes set to continue over the weekend 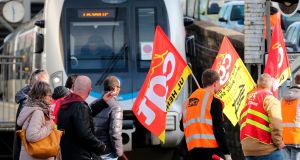 France will continue to be paralysed by transport strikes on Saturday, Sunday and at least through Monday, the Paris transport authority RATP and the state-owned railway SNCF announced.

“We will be at the same level of disruption as preceding days,” said Agnès Ogier, spokeswoman for the SNCF.

One in six high-speed TGV trains, one in 10 inter-city and regional trains and 15 per cent of trains in the Ile-de-France Paris region will run over the weekend, the SNCF said.

The majority of Paris metro lines remain closed and air traffic continues to be severely disrupted.

The lack of public transport caused 600km of tailbacks in and around Paris at evening rush hour, twice the normal level.

Trade unions appear stronger than they have in a long time, because they were able to mobilise the largest number of protesters in nearly a decade on Thursday, the first day of the strikes.

A collective of unions, comprised of the CGT, FO, Solidaires, FSU and three youth organisations, has called for further protests on Tuesday, December 10th.

The unions will continue negotiations with prime minister Edouard Philippe on Monday.

Speaking on the steps of his office on Friday, Mr Philippe promised to unveil “the entire government project” on Wednesday, December 11th at noon.

The dispute over President Emmanuel Macron’s reform of the pension system appears to be slowly inching towards a resolution.

Jean-Paul Delevoye, the high commissioner for pension reform, said the government is “looking for a a compromise” that would enable it to proceed with an “essential” reform.

That compromise is likely to involve the date when the reform will take effect, the length of the transition between old and new pension regimes, the formation of a body to administer the new system – whether the state or social partners – and especially the legal retirement age.

The moderate CFDT union, France’s largest, advocates a universal point system, based on employee contributions, which is also Mr Macron’s objective. Only the railway branch of the CFDT participated in Thursday’s demonstrations.

But the CFDT insists that the official retirement age, currently 62, must not be changed because to do so would punish workers. If he is to keep the support of the CFDT for the point system, which is rejected by other unions, Mr Macron may be forced to abandon hope of raising the retirement age.

Mr Philippe sounded conciliatory on Friday. “My logic will never be that of confrontation,” he said. Alluding to transport workers, he added, “it would not be reasonable, nor fair, to change the rules [of their retirement] in mid-course”.

At the same time, Mr Philippe warned: “They know that they will one day have to renounce the special retirement regimes, which are no longer understood. They even know that . . . we will have to work a little longer . . . It is what is happening in all countries similar to France.”