America Letter: Inquiry entered new phase this week with Pelosi saying she had ‘no choice but to act’ 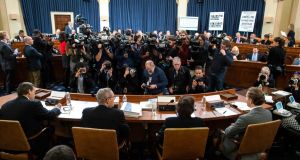 Any impeachment trial is likely to deepen the political divisions in the country. Photograph: EPA/Michael Reynolds

This week Donald Trump’s inexorable slide towards impeachment was confirmed, as House speaker Nancy Pelosi announced that charges against him should proceed.

The president’s behaviour, she said in a solemn address to the nation on Thursday, left her with “no choice but to act”. As a result, she was calling on the House judiciary committee – the congressional body tasked with drafting articles of impeachment – to take this crucial step.

It is now all but certain that the committee will recommend to the full House of Representatives that Trump should be impeached. As was the case with Bill Clinton, who was impeached following a vote in the House on December 19th, 1998, Trump is facing the real prospect of a pre-Christmas impeachment vote.

While it is widely expected that the Senate will not convict him in the event of a trial given the Republicans’ majority in the chamber, he will nonetheless have the ignominious distinction of being only the third president in history to be impeached (Nixon resigned before the impeachment vote was held).

The inquiry, which began in September after the White House released details of a phone call between Trump and Ukrainian president Volodymyr Zelenskiy in which Trump pressed for investigations into Joe Biden, entered a new phase this week when the judiciary committee assumed control of the process.

Following weeks of private and public depositions by the House intelligence committee, colleagues in the judiciary committee held their first hearing on Wednesday. It was always going to lack the punch of the earlier testimonies, which heard from first-hand witnesses such as Fiona Hill and EU ambassador Gordon Sondland, leading to explosive allegations against the president.

Wednesday’s witnesses were four law academics, invited to give their perspectives on the “constitutional grounds for presidential impeachment” as the session was austerely billed.

But for the steady stream of journalists and curious members of the public who are witnessing the historic inquiry unfold in real time on Capitol Hill, Wednesday’s session was equally enlightening.

For a few hours, the participants in Washington’s head-spinning political world stepped back from the daily combat of partisan politics and received a lesson in political history.

Despite some efforts to delegitimise the process – “America will see why most people don’t go to law school,” declared Republican Doug Collins, himself a graduate of Atlanta’s George Marshall law school – the experience was more one of a university seminar than a political hearing.

The four leading academics gave their views on impeachment, transporting those present in the historic Ways and Means committee room to a more rarefied time and place. There was much talk of the founding fathers, and the legal deliberation that went into the drafting of the US constitution in Philadelphia more than 200 years ago.

Witnesses spoke of Alexander Hamilton and Benjamin Franklin, about James Madison’s warning that a future president might “betray his trust to foreign powers” and William Richardson Davie’s worry that if a president could not be impeached “he will spare no efforts or means whatever to get himself re-elected”.

Obscure figures from 18th century British history were mentioned, such as Warren Hastings, the first British governor-general of Bengal, and Lord Macclesfield, the former lord chancellor of England who both faced impeachment charges.

As the 42 members of the committee pondered the weighty issues of constitutional theory there was a sense that all four professors were trying to stay above the fray of partisan politics.

Jonathan Turley – the only one of the four witnesses selected by Republicans – seemed eager to stress his bipartisan credentials. While he warned that Democrats were rushing into impeachment, he noted that he didn’t vote for Trump and said the president’s call with Zelenskiy was “far from perfect”.

Political reality did intrude on proceedings when Prof Pamela Karlan referenced Trump’s son Barron. Her comments provoked a rare Twitter put-down from the usually implacable Melania Trump, who said the academic should be “ashamed” of herself.

But for the most part Wednesday’s hearing was an important reminder of the deep intellectual roots and democratic ideals that underpinned the founding of the US in the late 18th century.

Whether this message impacted on Trump seems unlikely – Trump dismissed the hearing as “boring” as he spoke to reporters in London.

But as the US braces itself for an impeachment trial that is likely to deepen the political divisions in the country, it offered a welcome reflection on the constitutional principles that underpin the American republic.