Despite dire conditions, migrants reluctant to be moved further from their EU goal 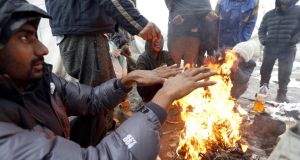 Migrants warm themselves on a snowy day at the Vucjak refugee camp outside Bihac, northwestern Bosnia and Herzegovina. Photograph: Fehim Demir

Bosnia has pledged to move hundreds of migrants from a squalid makeshift camp on the country’s border with Croatia and shut down the site after a top European human rights official warned that people could die there this winter.

Yet despite the grim conditions at the Vucjak camp, Bosnian police may face resistance next week when they try to relocate migrants to facilities much further from the frontier, because they want to keep moving towards the wealthy heart of the EU.

Most of the more than 45,000 migrants who have entered Bosnia in the last two years have managed to continue on into the EU, but about 7,000 are now in the Balkan state, with the vast majority gathered in Una-Sana canton close to Croatia.

Bosnian officials have long resisted international pressure to open new accommodation for migrants, and in June the local authorities moved hundreds of them to Vucjak – a former rubbish dump that may contain pockets of explosive methane, does not have electricity or running water, and is close to minefields from Bosnia’s 1992-1995 war.

“If we don’t close the camp today, tomorrow people will start dying here,” Dunja Mijatovic, the Council of Europe’s commissioner for human rights, said after visiting the freezing and snow-covered camp this week.

“The living conditions of hundreds of human beings in the improvised Vucjak camp are shameful. That camp should have never been opened in the first place. It is now urgent to relocate these people and provide them with decent accommodations,” she said in a statement on Friday.

Ms Mijatovic, who was born in Bosnia, said Vucjak was “terrible before the cold weather” and “even more inhumane now that temperatures have dropped below freezing”.

Bosnian security minister Dragan Mektic said that next week migrants would be moved from Vucjak to other sites including barracks near Sarajevo, some 300km to the southeast.

“We are working to set up the barracks in Blazuj as well as possible. It will be ready soon. By the end of next week, the Vucjak camp will be closed,” he said on Friday.

Workers with the Bosnian Red Cross, which has been providing meals and basic medical care for migrants at Vucjak, said this week that many men in the camp were refusing to eat in protest at the conditions; rather than be moved to better facilities, however, they want above all to be allowed to enter the EU.

Ms Mijatovic also raised concerns over numerous reports of migrants being roughed up and robbed by Croatian border guards.

Two Nigerian students who were in Croatia for a table tennis tournament this week accused police there of detaining them and forcing them over the border into Bosnia on suspicion of being illegal migrants.