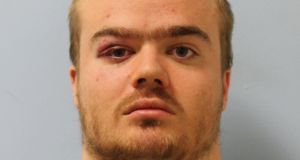 Jonty Bravery (18), who pleaded guilty to the attempted murder of a six-year-old boy at London’s Tate Modern art gallery at the Old Bailey. Photograph: Metropolitan Police/AFP via Getty Images

A teenager who threw a six-year-old boy from a viewing platform at the Tate Modern art gallery has pleaded guilty to attempted murder.

Jonty Bravery (18) entered his plea during a 12-minute hearing at the Old Bailey in London on Friday.

He was remanded in custody by the judge, Mr Justice Edis, ahead of his sentencing in February next year.

The victim, who cannot be named because of his age, continues to recover slowly in his native France after spending months in intensive care.

Writing on a GoFundMe page last month, which has raised around €130,000 for his medical treatment, the boy’s family said he was “now able to venture outside” and had regained some movement in his legs.

Bravery, of west London, was arrested moments after the incident on the 10th storey balcony of the tourist attraction on Sunday, August 4th.

The teenager, who has autistic spectrum disorder, obsessive compulsive disorder and was likely to have a personality disorder, has been held at Broadmoor Hospital since mid-October.

The court previously heard how Bravery was seen wandering about the viewing platform before picking up his victim and throwing him over the edge.

He then approached a member of staff, explaining: “I think I’ve murdered someone, I’ve just thrown someone off the balcony.”

He said he heard voices tell him he had to hurt or kill people, the court was told.

Bravery later told police he had to prove a point “to every idiot” who said he had no mental health problems, asking police if the incident was going to be on the news.

He said: “I wanted to be on the news, who I am and why I did it, so when it is official no-one can say anything else.”

In a series of social media posts, which have since been deleted, Piers Bravery - father of the defendant – attempted to raise awareness of autism and its treatment.

In one tweet to Health Secretary Matt Hancock, posted less than three months before the incident, Mr Bravery said: “Yes, Matt Hancock, you do have a duty. You are a public servant so do your job and stop more children dying and being abused in these repugnant institutions.”

The court previously heard how Bravery’s mental health deteriorated in custody, and he spent some time in segregation.

The public was initially banned from knowing Bravery’s identity due to a reporting restriction protecting the then-17-year-old from being named.

But the court heard how Bravery had told others at Cookham Wood Young Offender Institute in Rochester who he was and what he had done.

The judge turned down an application from the local authority to extend reporting restrictions beyond his 18th birthday, the point at which youths can ordinarily be named.

She said: “This devastating and shocking incident at the Tate Modern on 4 August of this year changed the lives of Bravery’s young victim and his family forever.

“The boy was singled out by Bravery, who threw him from the viewing platform intending to kill him.

“This was a terrifying experience for the boy’s parents and our thoughts are very much with them all at this difficult time. We hope he makes as full a recovery as possible.” – PA