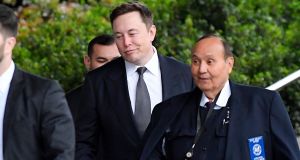 Jurors were expected to begin deliberating in Los Angeles on Friday in the lawsuit brought against Elon Musk by a British cave explorer who says the Tesla founder defamed him with tweets suggesting he is a paedophile.

The three-man, five-woman US district court jury will likely get the case before noon on Friday, after a federal judge instructs them on the law and lawyers for both men deliver closing statements.

The jurors will be asked to decide by unanimous vote if Mr Musk (48) defamed Vernon Unsworth with three July 15th, 2018 tweets, and if so how much he must pay in damages.

Legal experts are closely watching the proceedings, which is believed to be the first major defamation lawsuit brought by a private individual to go to trial over a tweet.

Mr Unsworth on Thursday declined to apologise for a July 13th, 2018, CNN interview in which he said Mr Musk’s offer of a mini-submarine to help rescue a boys’ soccer team from a flooded Thailand cave was a “PR stunt” and the wealthy entrepreneur could “stick his submarine where it hurts”.

“Do you believe Mr Musk is so cold-hearted that he was sending over this sub with no regard for the children’s lives?” Bill Price asked Mr Unsworth. “Are you willing to apologise to Mr Musk for saying that it was just a PR stunt?”

Mr Unsworth, who brought the suit against Mr Musk after the Tesla and SpaceX chief referred to him as a “pedo guy” on Twitter, declined.

“My insult was to the tube and not to Mr Musk personally,” Mr Unsworth said. “I’m not sure how I need to apologise. It was my opinion at the time and I stand by that opinion.”

After two days of testimony dominated by Mr Musk’s global celebrity, the British cave explorer took centre stage in Thursday’s proceedings. Mr Unsworth had testified feelingly on Wednesday about the impact of being “branded a paedophile” by Mr Musk’s tweets, which were published by an account with approximately 22 million followers. “I feel humiliated, ashamed, dirty – I was effectively given a life sentence without parole.”

But under cross-examination, Mr Unsworth’s own words were placed under the microscope. Additional questioning appeared designed to undercut Mr Unsworth’s claim to have suffered emotional distress over Mr Musk’s words.

After it was established that Mr Unsworth had not mentioned such distress in many thousands of text messages exchanged over months with a half-dozen friends, the 64-year-old said: “I very rarely talk to my friends about my emotional issues, certainly not in text messages. I bottle it up.”

Mr Price also displayed a photo of Mr Unsworth and other members of the British rescue team taken with Theresa May outside 10 Downing Street. “You would agree that the prime minister of England would not want to be seen with someone who is a paedophile?” Mr Price asked.

On Tuesday, Mr Unsworth had testified that the great honour of his MBE was clouded by his shame at the “pedo guy” smear, and said he only attended his investiture because his mother, partner and niece asked him to.

Further questions addressed Mr Unsworth’s involvement with various film and book projects about the cave rescue. Mr Unsworth said that he briefly engaged an agent and hoped to sell his story for a substantial sum, as others involved in the rescue have done, but none of the projects materialised.

Mr Unsworth did assist with three book projects for free, including a children’s book, and was paid a total of £2,600 (€3,080) for appearing in two documentaries, he said. Mr Unsworth works as a financial consultant and earns approximately £25,000 annually, he testified.

Dr Jim Jansen, a professor of computer science at Penn State university, provided expert testimony for the plaintiffs on the “level of online dissemination” of Mr Musk’s “pedo guy” statement. Dr Jansen testified that 490 articles had appeared on 361 websites in 33 countries about Mr Musk’s remarks, based on searches limited to the English language and excluding articles about Mr Unsworth’s litigation.

The jury also heard excerpts from a video deposition by Mr Unsworth’s wife, Vanessa Unsworth. The couple have been living separate lives since around 2006 but remain married. Vanessa testified that her husband was “really devastated” by Mr Musk’s remark and said she was “incredibly proud” of his actions in the cave rescue.

Asked about Mr Unsworth’s criticism of Mr Musk, she said: “It is a comment that, as Brits, we do say: ‘Stick it where the sun doesn’t shine.’”

Mr Musk’s defence attorneys did not call any witnesses. The defence asked the judge to decide the case on the law, arguing that “no reasonable jury could find for Unsworth on the basis of law”, which the judge refused to do.

In his own testimony earlier this week, Mr Musk (48) apologised to Mr Unsworth and said he did not believe the cave explorer was a paedophile.

He also dismissed the tweets as an “off the cuff” response to watching a replay of Mr Unsworth’s CNN interview, at a time he felt overworked from running Tesla, which makes electric cars, and SpaceX, a rocket company that offered the mini-submarine.

To win his lawsuit, Mr Unsworth needs to show Mr Musk was negligent in publishing a falsehood that clearly identified him and caused him harm. He does not need to show that Mr Musk acted with “actual malice”, which is much tougher to prove. – Reuters/Guardian