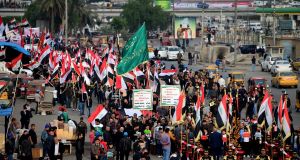 The attacks come one day after a string of suspicious stabbing incidents left at least 13 wounded in Baghdad’s Tahrir Square, the epicentre of Iraq’s leaderless protest movement. Photograph: Murtaja Lateef/EPA

Security and medical officials say at least two of the dead were police officers.

Protesters fearing for their lives ran from Baghdad’s Khilani Square to nearby Tahrir Square and mosques to take cover.

Protesters are occupying part of Jumhuriya, Sinak and Ahar bridges in a stand-off with security forces.

All bridges lead to or near the heavily-fortified Green Zone, the seat of Iraq’s government.

The attacks come one day after a string of suspicious stabbing incidents left at least 13 wounded in Baghdad’s Tahrir Square, the epicentre of Iraq’s leaderless protest movement.

The attacks by unknown perpetrators occurred as demonstrators supporting political parties and Iran-backed militias withdrew from the Square on Thursday evening.

The incidents fuelled paranoia among protesters, who immediately implemented self security measures to uncover saboteurs within the square. – AP