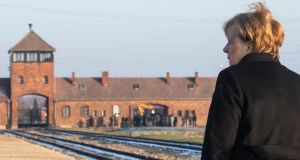 German chancellor Angela Merkel expressed “deep shame” on Friday during her first visit as chancellor to the Auschwitz-Birkenau Holocaust memorial and vowed to fight rising racism and anti-Semitism in Germany and Europe.

Dressed in black, Dr Merkel said the crimes committed at the site in southern Poland where the Nazis ran their largest death camp would always be part of German history.

“This site obliges us to keep the memory alive. We must remember the crimes that were committed here and name them clearly,” Dr Merkel said during a ceremony attended by Polish prime minister Mateusz Morawiecki.

“I feel deep shame given the barbaric crimes that were committed here by Germans,” she added.

Dr Merkel brought a €60 million donation from Germany’s federal government and its 16 states to help conserve the site where 1.1 million people were killed, most of them Jews.

Before her speech, Dr Merkel and Mr Morawiecki toured the camp’s crematorium where victims’ bodies were burned. They walked through the camp’s iron gate bearing the motto “Arbeit macht frei” (Work sets you free) and visited the barracks.

Dr Merkel has regularly acknowledged German responsibility for atrocities in the second World War. Her visit ensured she followed in the footsteps of two former chancellors by seeing the site while in office.

“Today we are experiencing a worrying racism, rising intolerance, and a wave of hate crime,” Dr Merkel said in her speech. “We are experiencing an attack on the fundamental values of democracy and a dangerous revisionism of history which is used for the purpose of hostility against certain groups.”

Leaders of the far-right Alternative for Germany (AfD) party have been accused of trying to play down Nazi crimes and suggesting that history must be re-written to focus on German victims.

“We are particularly turning our attention to anti-Semitism, which threatens Jewish live in Germany, the European Union and beyond,” Dr Merkel said.

“Auschwitz was a German extermination camp, operated by Germans. It is important for me to stress this fact. It is important to clearly name the culprits: it is us Germans and we owe this to the victims and to ourselves,” she added.

Germany is the largest donor to the foundation which funds conservation efforts at the site.

The Polish government is one of the largest financial supporters of the Auschwitz museum as a whole – it funded more than 20 per cent of its budget in 2018.

More than 3 million of Poland’s 3.2 million Jews were killed during the Holocaust, roughly around half of all the Jews murdered during the second World War. – Reuters