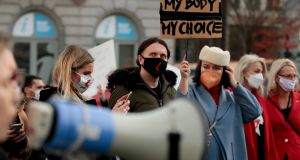 Supporters of Polish Women for abortion demonstrate in front of the European Parliament in Brussels, Belgium. Photograph: Olivier Hoslet/EPA

The European Parliament accused Poland’s nationalist government on Thursday of improperly influencing a court that imposed a near-total ban on abortion, and said that showed that the rule of law had collapsed in Poland.

The head of the court hit back, accusing the European Parliament of “unprecedented” interference in Polish affairs - the latest in a series of clashes between institutions in Warsaw and Brussels.

Hundreds of thousands of Poles have taken to the streets since an October 22nd Constitutional Tribunal ruling that sharply limited Poland’s already restrictive abortion laws.

The protests have seen a broader outpouring of anger at Poland’s nationalist rulers, with many criticising government judiciary reforms they say have allowed the ruling Law and Justice (PiS) party to hand pick judges.

Since coming to power in 2015, PiS has clashed with the European Union over the judiciary reforms, which the bloc says violate democratic standards. PiS has rejected such accusations.

Poland and Hungary vetoed the EU budget and a Covid-19 recovery fund this month, after member states sought to tie the funds to adherence to the rule of law.

The motion from members of the European Parliament described the abortion ruling as “yet another example of the political takeover of the judiciary and the systemic collapse of the rule of law in Poland”.

“The aforementioned ruling was pronounced by judges elected by and totally dependent on politicians from the PiS (Law and Justice)-led coalition,” it added.

The resolution called for EU institutions to do more to support sexual and reproductive health rights across member states and to support grassroots and civil society groups that foster the rule of law.

“MEPs are entering into the area of the independence of the Constitutional Tribunal ... which violates the separation of powers, and thus the foundations of democracy,” she added.

Poland’s government has not yet published the court ruling on abortion, meaning it is not yet enforceable. PiS says the government is waiting for the court to provide a more detailed justification.