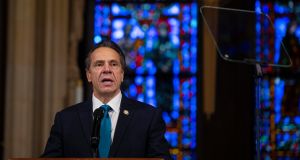 The US supreme court has ruled against coronavirus restrictions imposed on religious services by New York governor Andrew Cuomo, in a ruling he called “moot” but that gave the first clear sign of how Amy Coney Barrett has tilted the court’s balance.

The justices ruled five-four to temporarily bar Mr Cuomo from placing limits on the number of people who can attend services, which he did earlier this year in an attempt to slow the spread of coronavirus. The injunction, which was granted on the grounds of maintaining freedom of speech and religious practice, will apply until the case is heard in the appeals court.

The court ruled earlier this year to allow similar restrictions in California and Nevada. But the death of the liberal justice Ruth Bader Ginsburg has since changed the make-up of the court, with President Donald Trump replacing her with Ms Barrett, a conservative Catholic.

Ms Coney Barrett cast the deciding vote in favour of the injunction late on Wednesday night.

Mr Cuomo called the ruling “irrelevant” on Thursday, given that the restrictions had already been lifted for the two congregations that brought the case. Mr Cuomo told reporters: “It’s irrelevant of any practical impact because of the zone they were talking about is moot. It expired last week – it doesn’t have any practical effect.”

He added: “It’s more illustrative of the supreme court than anything else.”

In an unsigned majority ruling, justices wrote: “Members of this court are not public health experts, and we should respect the judgment of those with special expertise and responsibility in this area.”

“But even in a pandemic, the constitution cannot be put away and forgotten. The restrictions at issue here, by effectively barring many from attending religious services, strike at the very heart of the First Amendment’s guarantee of religious liberty.”

Mr Trump welcomed the ruling on Thursday, retweeting a link to the ruling with the comment: “HAPPY THANKSGIVING!”

Churches and other places of worship have been at the forefront of the battle against strict lockdown rules, which many states imposed earlier this year and have tightened in recent weeks as cases, hospital admissions and deaths have all climbed.

More than 2,200 people died in the US of the virus on Wednesday, according to the Covid Tracking Project, while a record 90,000 Americans remain in hospital.

Public health experts are particularly concerned about the effect the Thanksgiving holiday might have on the spread of the disease.

Anthony Fauci, the head of the National Institute of Allergy and Infectious Diseases, made what he called a “final plea” on Wednesday for people not to travel to see their family. Dr Fauci warned: “To the extent possible, keep the gatherings, the indoor gatherings, as small as you possibly can.”

As part of their countermeasures, several states have imposed limits on how many people can attend religious gatherings. In New York, Mr Cuomo banned places of worship from admitting more than 10 people if they were in a “red zone” of high transmission, or 25 if they were in an “orange zone”.

The case before the supreme court was brought by the Roman Catholic Diocese of Brooklyn and two Orthodox Jewish congregations.

It was upheld on the vote of five of the six conservative justices on the court, including Ms Barrett. Chief justice John Roberts, who was appointed by former president George W Bush, sided with the liberal minority. Mr Roberts said an injunction was not necessary as the two congregations in question were in areas that had since moved out of the red or orange categories.

In a note agreeing with the majority ruling, Neil Gorsuch, whom Mr Trump appointed at the beginning of his term, said: “At least according to the governor, it may be unsafe to go to church, but it is always fine to pick up another bottle of wine, shop for a new bike or spend the afternoon exploring your distal points and meridians. Who knew public health would so perfectly align with secular convenience?” – Copyright The Financial Times Limited 2020