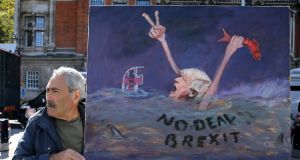 Economic research shows unambiguously that a no-deal Brexit will have large negative effects on output and jobs in the UK (especially on Northern Ireland) and Ireland.

Evidence from the institutes that we lead, derived from the rigorous and politically independent analysis that has characterised our work since 1938 (NIESR) and 1960 (ESRI) is overwhelmingly corroborated by the wider economics profession. So why on earth is a no-deal Brexit being threatened by the UK government?

Such an exit is not only of immediate danger to the UK’s existing external relations but also imposes chronic uncertainty on the type of external relations that will obtain in the future, as well as requiring the re-design of the political and economic landscape. It may well take a decade or so to work these through.

The union with Scotland seems likely to be in severe danger

The long-run impact will be that UK output will be 5-7 per cent lower than it would otherwise have been if this exit door had not been chosen. The damage will be so great that there is unlikely to be much palpable increase in economic activity until 2021 if the UK exits in this manner at the end of October.

Indeed, the economic shocks to many of the UK’s key trading partners will be just as large. The ESRI has estimated that Ireland’s GDP would be 5 per cent lower in a no-deal scenario compared with the remain counterfactual, although the full set of channels may not have been fully captured.

There are two related questions for the UK government’s no-deal gambit. The first is whether the threat is credible and, if so, is it sufficiently shocking to force a rethink on all sides?

Should the threat be carried out, it is commonly agreed that the UK economy and that of its main trading partners will suffer. In an application of “mutually assured destruction”, it is reasoned that the shocks would be so large that no country would actually accept them.

With both the UK and parts of the European Monetary Union such as Ireland (which do not have recourse to an independent monetary stimulus) verging on recession already, a prospective shock of this magnitude, it is argued, would surely impose circumspection and lead to a renegotiation of the withdrawal agreement and political declaration.

But it is clear that there is limited time for any such renegotiation and if we are to change the deal, three years of tortuous negotiations tell us that 8½ weeks is not enough. So this leg of the gambit seems unlikely to succeed.

The second question is simply whether the gambit is worth the risk. That depends on the definition of pay-off under the various states. Let us think of the expected return from a gamble as roughly the weighted probability of the two economic outcomes: a soft Brexit costing 2-3 per cent of GDP and a no-deal Brexit costing 5-7 per cent of GDP.

Because one of the outcomes is very bad, the gamble must lead to a lower return than just banking on one outcome alone. The only way by which the gamble can lead to a better return is if the gambit itself improves the return from any soft Brexit. In other words, it is simply a mechanism to leverage a better deal. Again we arrive back at the question of the time constraint, which makes an expected loss inevitable.

An alternate interpretation is that the pay-off is not couched in the minds of the UK government in terms of an economic outcome at all but only in terms of a political one.

That would imply that the UK will just leave, by whatever means by the end of October, under the reasoning that the political return would be sufficient to allow the normal business of government to resume, possibly after an election.

But then what political landscape would remain? The union with Scotland seems likely to be in severe danger under this scenario and the peace and stability of Northern Ireland and Ireland put under great strain with the erection of a hard border. The question then is for what aim are we injecting all these shocks? What is the plan for afterwards? Where are we going and how are we going to get there?

The destination in the case of EU exit does not answer the question of the UK’s economic future nor does it provide an obvious improvement to the current position. Ireland will have to deal with economic disruption and the possible impacts on its relationship with Northern Ireland.

It is the politics of party that seem to threaten peace and prosperity. It is therefore not difficult to conclude that the UK government is more interested in the political advantage of being seen to have delivered Brexit with any economic case not only taking a backseat but being left in the luggage compartment.