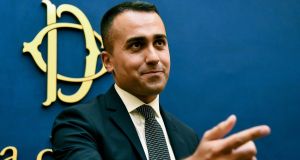 Italy’s president has given the green light to a new coalition government that is expected to be less confrontational towards the EU, pushing the anti-migrant populist leader Matteo Salvini’s League party back into opposition.

After a meeting in Rome between president Sergio Mattarella and Giuseppe Conte on Wednesday, the new government is expected to be formally sworn in on Thursday. Mr Conte will lead the coalition between the Five Star Movement and the Democratic party (PD) as prime minister.

“There is a parliamentary majority and a government has been formed,” Mr Mattarella said in a press conference.

Mr Conte said: “We will devote our best energies, our skills and our passion to making Italy better in the interest of all citizens.”

He said that veteran PD member of the European Parliament Roberto Gualtieri would serve as economy minister in the new government, while Five Star leader Luigi Di Maio would be foreign minister in a cabinet divided almost equally between the two parties.

Italian government borrowing costs fell sharply as investors priced in a less hostile relationship between the euro zone’s third-largest economy and the EU now that Mr Salvini’s party is no longer in government.

His coalition with Five Star, which collapsed in August amid mutual recriminations, lasted 14 months.

Mr Salvini, who triggered the collapse of his party’s coalition with Five Star last month by calling for a vote of no confidence in Mr Conte, railed against the new government as a stooge of foreign powers.

“A government born in Paris and Berlin ... without dignity or ideals,” he wrote on his Facebook page after the announcement of new ministers. “They will not be able to escape the judgment of the Italians for much longer – we are ready.”

Emboldened by the League’s strong showing in the European Parliament elections in May, Mr Salvini this summer attempted to capitalise on his popularity by forcing a government collapse and snap elections.

However, an unexpected pact formed by the once sworn enemies of the anti-establishment Five Star and the centre-left PD frustrated his ambition to become Italy’s prime minister.

The League leader will be replaced as interior minister – a position he used as a platform to rail against illegal immigration – by the political independent Luciana Lamorgese.

Of the new government’s 21 ministers, 10 are from Five Star and nine are from the PD, with the remaining two from smaller parties or independents.

Mr Di Maio’s appointment as foreign minister leaves him with the task of rebuilding relations with France. Last year his decision to voice support for the “gilets jaunes” protests that had broken out across France prompted the Elysée to withdraw its ambassador from Rome. He later returned.

The new government is expected to be subject to a vote of confidence in Italy’s two parliamentary chambers next week, in which it is expected to command a narrow majority. – Copyright The Financial Times Limited 2019