Brexit: Johnson claims chances of deal with EU are rising 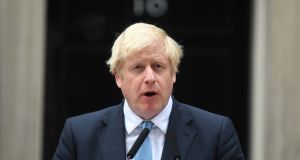 UK prime minister Boris Johnson has said he does not want a general election, and claims the chances of a Brexit deal with the EU are rising.

Mr Johnson made a statement on Downing Street on Monday amid speculation he would call an election if parliament defeats him over his Brexit strategy.

While he stopped short of threatening an election, Mr Johnson said if MPs voted against the government they would “chop the legs” out from under the UK’s position in negotiating a deal with the EU.

He said: “I say, to show our friends in Brussels that we are united in our purpose, MPs should vote with the government against Corbyn’s pointless delay.

“I want everybody to know there are no circumstances in which I will ask Brussels to delay. We are leaving on October 31st, no ifs or buts.”

He said: “We will not accept any attempt to go back on our promises or scrub that referendum.

“Armed and fortified with that conviction, I believe we will get a deal at that crucial summit in October. A deal that parliament will certainly be able to scrutinise.”

He said negotiators should be able to get on with their work without the “sword of Damocles” of an election hanging over them.

Mr Johnson’s promise to take the country out of the European Union on October 31st with or without a divorce deal has propelled the United Kingdom towards a constitutional crisis and a battle with the 27 other members of the bloc.

The prime minister called an unscheduled cabinet meeting for Monday evening and could ask MPs to vote on calling an election if his government loses a no-deal Brexit vote this week.

Earlier, the BBC’s political editor Laura Kuenssberg reported: “Cabinet is being called for this afternoon. Real possibility now Johnson might put a motion down to ask MPs to vote for an election this week.”

“This would happen if the rebels pass the law - not of course if they lose!”

Mr Johnson is also due to speak to Conservative MPs this evening.

A Downing Street source said the vote would be treated as “an expression of confidence” in the government.

The prime minister has repeatedly stated the UK will leave the EU on October 31st, with or without a deal.

The cabinet will discuss expected legislation from cross-party opposition MPs aimed at blocking a no-deal which is expected when parliament resumes on Tuesday.

Should Mr Johnson want to call an election he will need support from Labour for an election.

Its leader Jeremy Corbyn has said his party wanted a new election above all else, to oust Mr Johnson’s “phony, populist cabal”.

As tensions over a vote on the expected no-deal legislation rise, Mr Johnson’s office has threatened to expel and deselect Tories who vote against his government, prompting defiance from senior party members.

These include former chancellor of the exchequer Philip Hammond and ex-justice secretary David Gauke, who say a no-deal departure will be catastrophic for the UK economy.

On Monday Taoiseach Leo Varadkar said he may meet Mr Johnson next week. Mr Varadkar said he will listen to alternatives to the Border backstop as he disclosed details of the proposed encounter during an event on Monday.

The future of the frontier is expected to be high on the agenda during their discussions. Officials are working on two possible dates.

Mr Varadkar said: “Of course, I would listen to any proposals that the British prime minister may have to achieve that by an alternative means and we provide for alternative arrangements in the joint political declaration.

“The difficulty is that anything we have seen so far, when it comes to alternative arrangements, do something very different.

Mr Johnson has said he wants to scrap the backstop.

“The backstop is a means to an end. It is there to ensure that we continue to have frictionless trade north and south, that there is no physical infrastructure, no checks, no controls, no tariffs.

On Sunday, the EU chief negotiator, Michel Barnier, emphasised that the backstop could not be renegotiated as part of the Withdrawal Agreement.

On Monday, the Guardian published details from leaked British government papers which state that all potential British solutions to the post-Brexit Irish Border are fraught with difficulty and would leave smaller businesses struggling to cope.

A report summarising the findings of the British government’s official “alternative arrangements” working groups concluded there are issues with all the scenarios put forward to try to replace the backstop arrangement.

There are also specific concerns over whether any technological solution could be delivered to monitor cross-Border trade.

Critics said the paper should “ring alarm bells” across the British government over how likely it is that alternative arrangements to the backstop will be found.

The dossier marked “official-sensitive” prepared for the EU Exit Negotiations Board is dated August 28th.

It details how the findings of all advisory groups informing the government on the Border are being kept deliberately under wraps to try to avoid hampering Britain’s intended renegotiation of the backstop agreed to by former prime minister Theresa May.

The damning report shows there is no single deliverable solution at present, despite the fact Mr Johnson is almost a third of the way through the “30 days” target that the German chancellor, Angela Merkel, gave him 30 days to come up with a fresh Border proposal, 20 of which remain.

The report said: “It is evident that every facilitation has concerns and issues related to them. The complexity of combining them into something more systemic and as part of one package is a key missing factor at present.”

Scotland First Minister Nicola Sturgeon tweeted: “As talk of a general election mounts, I say ‘bring it on’...but it must be before Oct 31. MPs must not allow Johnson to game the date as a ploy to push through a no deal Brexit.”