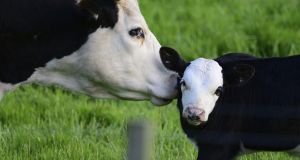 The Ulster Farmers’ Union has warned that nobody should underestimate the importance of EU supports on the North’s rural economy. Photograph: iStock

Farmers in the North could stand to gain millions of pounds in EU payments if the value of sterling weakens further gains the euro over this month.

The North’s Department of Agriculture, Environment and Rural Affairs (DAERA) in Northern Ireland has confirmed that farmers will receive 70 per cent of advanced EU funding under the Common Agricultural Policy (CAP) from October 16th.

The farm support payments are initially set in euro and then converted to sterling using the average exchange rate during the month of September.

According to the North’s Department for the Economy the amount paid to farmers “can be variable due to currency volatility”.

The department has estimated that “every 1 pence move in the value of sterling against the euro changes the amount paid by approximately £3.2 million”.

In a new report published this week on the potential impacts of sterling depreciation under a no-deal Brexit the Department for the Economy said that if the average exchange rate in September 2019 was based “on €1 =£0.9155” then direct payments to farmers in the North could jump from an estimated £286 million last year to £293 million this year.

Brexit means this is the last year that Northern Ireland farmers will receive CAP payments, which farming leaders believe have played a vital role in the survival of farming communities .

Norman Fulton, the deputy secretary of DAERA’s food and farming group, previously acknowledged that “CAP payments have been important in sustaining the industry, underpinning its competitive trading position and developing its environmental performance”.

The president of the Ulster Farmers’ Union (UFU) Ivor Ferguson, has also warned that nobody should underestimate the importance of EU support on farm businesses and the rural economy.

The UFU has repeatedly warned about the damage a no-deal Brexit would do to Northern Ireland’s largely family-owned farm businesses and said that it “must be avoided at all costs”.

Total farm income overall dropped by 24 per cent to £360 million and, according to Mr Ferguson, out of this “£286 million was made up of direct support from Brussels through the CAP”.

DAERA has said that advance payments will be made in the North this year from October 16th to all eligible farm businesses.

Four decent bottles if you’re just getting to know wine, including a great-value sparkler