Donald Trump rally: ‘I’ll just give you all a big fat kiss’

US president Donald Trump has returned to the campaign trail with an outdoor rally in Florida, his first rally since being hospitalised with Covid-19. Video: Reuters 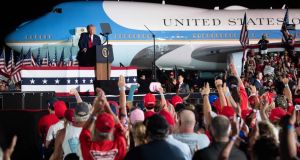 US president Donald Trump returned to the campaign trail last night, addressing thousands of supporters at a rally in Florida, as infectious disease expert Anthony Fauci warned that he was “asking for trouble.”

In his first visit outside Washington DC since his discharge from hospital over a week ago, Mr Trump held a campaign event at an airport hangar just north of Orlando.

Addressing thousands of supporters, many of whom were not wearing masks, he said he was “standing up for the American worker, the American family and the American dream”.

Mr Trump warned that if his Democratic opponent Joe Biden wins the election on November 3rd, “the radical left will be running the country. They’re addicted to power, and God help us if they ever get it.” Mr Biden will “defund your police , dissolve your border… destroy your suburb and drive God from the public square,” he said, claiming that the former vice president was “not 100 per cent, not 80 per cent, not 60 per cent there.”

On coronavirus, he said he wanted to congratulate Republican governor Ron deSantis, who was in the crowd and not wearing a mask, for opening up Florida. “You’re open and open for business and doing great,” he said, adding: “the cure cannot be worse” than the virus.

Referencing his own experience with the coronavirus,” he said: “I went through it. Now they say I’m immune. I feel so powerful, I’ll walk into that audience. I’ll walk in there and kiss everyone in the audience. I’ll kiss the guys and the beautiful women… I’ll just give you a big fat kiss.”

“When you’re the president you can’t lock yourself in the basement,” he added.

Mr Trump’s appearance at the rally – the first of several this week – took place as Dr Fauci criticised the president’s decision to hold large-scale events. Asked about his views on Mr Trump’s rally during a CNN interview last night, Dr Fauci said: “We know that that is asking for trouble when you do that.”

He continued: “We’ve seen that when you have situations of congregate settings where there are a lot of people without masks, the data speak for themselves. It happens. And now is even more so a worse time to do that, because when you look at what’s going on in the United States, it’s really very troublesome.”

During the hour-long event, Mr Trump said that November’s election is “the most important election in the history of our country – these people are crazy, we have to win,” warning against handing control to “the socialists, the Marxists and the left-wing extremists.”

Mr Trump’s appearance at the rally comes as polls show the president trailing his Democratic rival Joe Biden by double-digits, just three weeks ahead of the election.

Polls show that most Americans disapprove of Mr Trump’s handling of the pandemic which has led to the loss of approximately 210,000 lives and infected millions of Americans, including the president, the first lady and members of his administration including his speech writer Stephen Miller and press secretary Kayleigh McEnany.

Mr Trump spent much of the day at the White House yesterday before his departure for Florida tweeting. “Heading to the Greatest Economy Of All Time!!! VOTE,” he tweeted, as he seeks to hone his economic message ahead of November’s election. As his Democratic opponent Joe Biden campaigned in Ohio, the president tweeted: “Almost nobody showed up to the Sleepy Joe Biden “Rally” in Ohio. The reporting and polls are a Media Con Job – Fake News. We have far more support and enthusiasm than even in 2016. November 3rd. will be a great day for America!!!”