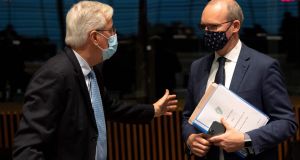 Several European Union member states including France are stepping up preparations for a no-deal Brexit as talks with Britain reach a decisive moment.

Negotiations have intensified as just weeks remain to clinch a deal in time to implement it before the end of the transition period on December 31st.

The bloc’s chief negotiator, Michel Barnier, briefed ministers from the 27 member states on Tuesday that some progress had been made in the talks but not nearly enough to reach a deal, with sticking points remaining on fishing rights and how to ensure fair competition between companies.

Several EU ministers stated their governments had stepped up planning for the possibility a deal may not be found, with France’s European affairs minister, Clément Beaune, saying the cabinet had met to discuss the matter, The Irish Times understands.

“As things currently stand, the hypothesis of a ‘no deal’ is a very real one, and also one that is unfortunately very likely today,” French foreign minister Jean-Yves Le Drian told the foreign affairs committee of the National Assembly after the meeting.

“We know the British skill in tactics . . . but today is not the time for tactics. We have finished playing, we are coming to the end of the game,” he added. “We are prepared for all eventualities.”

British prime minister Boris Johnson has spoken to French president Emmanuel Macron and German chancellor Angela Merkel in recent days, warning them the UK was prepared for a no-deal outcome.

Germany’s European affairs minister, Michael Roth, accused Britain of trying to “bilateralise” the negotiations and insisted that the 27 stood united.

“The negotiations are now at a very, very critical stage, and we are under very serious time pressure. We will see in the next few days whether a positive outcome can be achieved or whether we have to intensify our preparations for a scenario without an agreement,” Mr Roth told journalists.

“This is also a message to our British friends; no one should play down the risks of a no deal. This would be very bad news for everyone, for the EU, and even more so for the United Kingdom. In the midst of the most serious economic downturn in decades, it would inflict on our citizens another serious economic setback,” he added.

“It’s now up to the UK to make the decisive steps in key areas.”

It is understood the British side has softened towards the EU’s position on the so-called level playing field, but the issue of fishing rights remains vexed, with Britain pushing for EU coastal states to require permission in annual negotiations to access waters they have traditionally fished in.

A British government spokeswoman called for “more urgency and realism from the EU” and said the bloc “need to accept the UK’s status as a sovereign nation”.