Coronavirus: People in London to be banned from mixing indoors 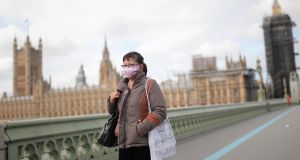 A woman in a face mask in London. Photograph: Aaron Chown/PA Wire

Millions of people in London are set to face tougher coronavirus restrictions banning households mixing indoors, but a political row has meant no decision has been made on Greater Manchester.

MPs in the capital have been told London will move to Tier 2 at midnight on Friday, meaning households will be banned from mixing indoors — including in pubs — from Saturday.

But a call between Greater Manchester leaders and Downing Street officials failed to reach an agreement on new restrictions and there will be further meetings later today, a source said.

A decision has been all but formally made to move Essex into Tier 2 restrictions shortly, the PA news agency understands.

And Lancashire MPs have been told that the region will stay under Tier 2 restrictions, despite speculation it would move into Tier 3.

Ministers are holding a series of talks with MPs from the regions affected by the changes ahead of health secretary Matt Hancock giving a Commons update on the measures.

London mayor Sadiq Khan told City Hall the expected move to Tier 2 is based on “expert public health and scientific advice about what is necessary to save lives in the capital” but stressed that he was pushing for extra support from the Government.

“Nobody wants to see more restrictions — but this is deemed to be necessary in order to protect Londoners’ lives by myself, London council leaders and by ministers,” he said.

The ban on households mixing indoors could be devastating for the capital’s 3,640 pubs and 7,556 restaurants — who will see business suffer but will not be eligible for British government support available to premises which have been ordered to close. – PA