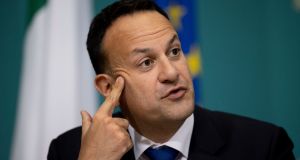 Minister for Enterprise Leo Varadkar: ‘There is so much unbelievable uncertainty facing Irish citizens and companies because of Brexit and Covid.’ Photograph: Tom Honan/Julien Behal Photography/PA Wire

The Government has set aside €5.5 billion across two different contingency funds due to the “unbelievable uncertainty” facing the State, Tánaiste Leo Varadkar has said.

As part of a budgetary package of almost €18 billion, some €5.5 billion is being put aside in two separate funds – the recovery fund, at €3.4 billion, and a further €2.1 billion in contingency funding.

“We have to be in a position to make decisions like, for example, extending the PUP for a longer period, making sure the wage subsidy scheme is there for as long as needed, maybe extending [the Covid Restrictions Subsidy Scheme].”

Minister for Finance Paschal Donohoe said in his budget speech that the recovery fund “will be targeted and will help stimulate increased domestic demand and employment”. It will focus on three main areas of infrastructure development, reskilling and retraining, and supporting investment and jobs. He said it was “a cornerstone of our continued economic response in 2021”.

The first €100 million tranche to be paid from the fund has already been approved for Mr Varadkar’s department, in order to help with Brexit preparedness. The Tánaiste said the funding was needed even if there was a free trade agreement between the EU and the UK, but that if there was not “then we will have to dip into the €3.4 billion, and we’ll have to do it long before the first of January,” he said.

Using the lack of an agreement as an example for why funding might be needed, he said: “If you’re a beef farmer or a food exporter, and you’re going to face 40 per cent tariffs in 72 days’ time, how do you prepare for that? They’re going to need State aid at that point, and that State aid will be forthcoming.”

Mr Varadkar said he had “never seen a budget before where there was €5 billion put there as a contingency”.

“Why is it there? Because there is so much unbelievable uncertainty facing Irish citizens and companies because of Brexit and Covid and we’ve set that aside in case we need to deploy it and we need to make those decisions,” he said.

Speaking on Tuesday night, Mr Donohoe said the €3.4 billion would also support new economic supports if they were deemed necessary.

Minister for Public Expenditure and Reform Michael McGrath said that the intention was to spend the entirety of the recovery fund in the coming year. “We anticipate there will be needs in the economy through the next year.”

He said around €400 million of the €2.1 billion contingency fund related to expected health expenditure. Mr Donohoe said the money in the recovery fund would be available regardless of the level of economic activity and how public health measures impacted business.

“The €3.4 billion recovery fund that we’ve outlined is independent of whatever level of public health guidance we will be at as we move through 2021,” he said.