Boris Johnson caught between rock and hard place on lockdown 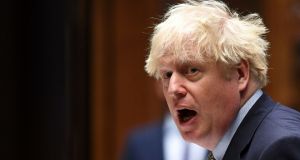 Britain’s prime minister Boris Johnson in the House of Commons in London on Wednesday. Photograph: Jessica Taylor/UK Parliament/AFP via Getty

As one European country after another moves closer to a second coronavirus lockdown, Boris Johnson is treading a narrow path between scientific evidence and political pressure.

Opinion polls reveal a British public eager to impose harsh restrictions to suppress the virus but Conservative backbenchers believe the government has already gone too far.

“The reality is that Conservative MPs are not seeing the future struggles of the NHS in their correspondence. They’re seeing that the current struggles of businesses in their constituency, people’s mental health problems, all of the very high costs is what’s coming to their inboxes, whereas perhaps ministers are being advised what will happen to the NHS if we don’t suppress. And that is where this tension comes from,” Wycombe MP Steve Baker told The Irish Times.

During Theresa May’s struggles over Brexit, Baker chaired the Eurosceptic European Research Group (ERG) which made her life hell and finally drove her from office. In recent weeks he has played a leading role in the Conservative backbench rebellion against Johnson’s coronavirus policy, which forced the government to agree to more parliamentary scrutiny of lockdown measures.

The prime minister’s strategy is based on two huge gambles

“I have a certain capacity for organising things in parliament,” he said.

Baker is on the libertarian wing of the party but the backbench insurrection extends far beyond that, with 1922 committee chairman Graham Brady one of its leading figures.

Johnson this week introduced a three-tier system of local lockdowns but he rejected his scientific advisers’ call for a national “circuit breaker” lockdown lasting two or three weeks.

Labour leader Keir Starmer’s call for such a lockdown, accompanied by a promise of Labour votes to compensate for any Conservative rebellion in parliament, has made Johnson’s position even more uncomfortable.

“The prime minister’s strategy is based on two huge gambles. The first gamble is a successful phase three vaccine trial. And the second gamble is that in the event that that vaccine is successful, that he can get the vulnerable population back vaccinated in time to keep the economy still propped up by QE [quantitative easing] and cheap credit,” Baker said.

“The Conservative Party parliamentary party doesn’t want to split. I’m very deliberately not set up the usual structures that I might have done for Euroscepticism. We don’t want to be splitting. We want to be supporting the prime minister.”

Baker last month compared Johnson to King Theodon in Lord of the Rings, under the spell of advisers like Dominic Cummings and needing to be woken up before “joy comes to pass in the kingdom”. He remains convinced that the prime minister must free himself from Cummings and the Vote Leave campaign veterans who favour a rough, polarising political discourse.

“You know, there’s also a poetry to it. Boris doesn’t want to be where he is. This isn’t who he is. He’s a charismatic visionary, full of fun, loves his freedom. He wanted to spend lots of money turning the country around. All of that money is now gone up the wall,” he said.

Baker has stepped away from the debate about Brexit, stressing that whatever happens in the next few weeks of negotiations with the EU, “this Brexit will be Boris’s Brexit and it’s nailed on it’s his”. He would prefer to leave the transition period with a deal and believes Britain should give the EU the comfort it needs on state aid rules to control state subsidies to business.

“Boris Johnson and the people around him need to accept that the EU needs to be given robust guarantees on state aid, that we will not be distorting our markets and exporting those distortions. That is not the same as submitting to the jurisdiction of the [EU] Commission and their state aid law, which we cannot do. If he does that, the Conservative Party will tear itself in two,” he says.

“But the corollary to that is that the European Union needs to accept that we are serious, that we don’t want to be members.”

Baker rejects the comparison between Johnson’s predicament over coronavirus and May’s over Brexit on the grounds that Conservative MPs were more evenly split over Europe. On coronavirus, he claims support for the government’s policy is limited to a handful of ministers and advisers, including Cummings, Michael Gove and health secretary Matt Hancock.

“Out of 365 members of parliament, I would think that probably about 350 or more are opposed to this strategy,” he said.

“So it will not be like Theresa May, because if the straw breaks the camel’s back and he’s on the wrong side of the argument, it will be over very quickly for him.”