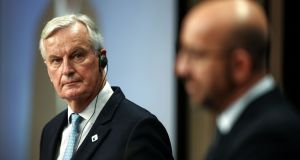 European Union leaders have told London to compromise to break a deadlock in talks and avoid deep disruption to trade relations between the bloc and its former member at the end of the year.

Leaders of the 27 member states agreed in Brussels to continue negotiations while stepping up preparations for the possibility no deal could be reached, calling on Britain to “make the necessary moves to make an agreement possible”.

Chief EU negotiator Michel Barnier told the leaders while there had been some movement in the talks, it was insufficient for a deal to yet be in sight.

“He will continue negotiating to the very end to get a deal,” Taoiseach Micheál Martin told journalists following Mr Barnier’s briefing. “But there are difficulties, I think it would be fair to say there are challenges . . . there hasn’t really been sufficient movement.”

Member states and the European Parliament have warned that in order for a deal to be finalised, the British government must remove articles of its Internal Market Bill that override aspects of last year’s withdrawal agreement designed to avoid the risk of a hard border on the island of Ireland.

The introduction of the Bill has hardened the resolve of EU states to ensure any deal reached contains built-in consequences if Britain deviates from the agreement, the Taoiseach told journalists.

“The implications of what was done in so far of eroding trust redoubles the commitment,” Mr Martin said.

Negotiators are close to agreement in some areas, but stark differences remain in the old stumbling blocks of fisheries, governance, and the level playing field, according to Mr Barnier.

“I can’t say as we stand here that we would necessarily get a deal on the basis of that,” Mr Barnier told the press. “We have got the prospects of a deal, we need to make progress.”

British prime minister Boris Johnson had warned the EU that his country was willing to pull out of talks if he judged that insufficient progress had been made by this week’s summit.

London’s chief negotiator David Frost announced he was “disappointed” at the summit’s conclusions and said that Mr Johnson would give his reaction on Friday.

EU leaders believe that the latest a deal can be reached is the first week of November, in order for it to be ratified and come into force on time to avoid an abrupt disruption to relations covering everything from exports to the recognition of driving licences.

In recent days tensions have risen over the issue of fishing rights, with Ireland joining a group of coastal member states to oppose the idea that their access to British economic waters could be curtailed as a trade-off to clinch a deal.

Leaders were also to discuss the Covid-19 pandemic, vaccines, and a climate goal of carbon neutrality in the bloc by 2050 over the two-day summit.

After mingling with leaders on Thursday morning, European Commission president Ursula von der Leyen was forced to abruptly leave and go into self-isolation as she was informed that a member of her staff had tested positive for the virus.

It was the second time Dr von der Leyen has had to go into isolation due to exposure in two weeks, illustrating the difficulties of continuing physical meetings as infections soar across the continent.

Not all leaders were happy that the summit had gone ahead at all.

“This summit should be held as a video conference,” Danish prime minister Mette Frederiksen told reporters on arrival in Brussels. “I have on several occasions proposed holding video conferences instead of meeting in person.”