Dutch opt for manual count after reports of Russian hacking 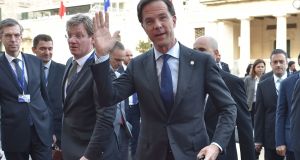 The Dutch are to turn back the clock almost a decade and count votes in their March general election by hand. This comes after a warning from the national security service that Russia, China and Iran have tried to hack government departments “hundreds of times” over the past six months.

In a special briefing to parliament, home affairs minister Ronald Plasterk said the decision had been taken as a result of advice from IT specialists. They had identified “vulnerabilities” in the vote counting system, specifically when computers in temporary count centres were connected to the internet.

Some 12.6 million Dutch nationals are eligible to vote in the election, which is expected to boil down to a neck-and-neck contest between Liberal prime minister Mark Rutte and Geert Wilders, leader of the far-right Freedom Party, for the right to form a new coalition government.

The Dutch poll on March 15th will be the first in a series of European elections – followed by the presidential election in France and federal elections in Germany – that could change the political face of the EU. All three governments have been warned of possible manipulation by hackers.

For the past eight years, tallying software has been distributed on CD to regional count centres in the Netherlands just before elections, and, in the case of general elections, the results were collated by sending them online to a national count centre.

“I’ve discussed this with the national elections commission, and we cannot allow there to be any doubt at all about the result next month,” said Mr Plasterk.

“So now that we have concrete indications that countries such as Russia, for example, are interested in our election process, we feel it’s appropriate and more secure to go back to good old pen and paper.”

Those indications have come from the national intelligence service, AIVD, whose director Rob Bertholee revealed that Russia, China and Iran had made hundreds of attempts over the past six months to hack into government departments and private companies.

“I consider this a threat to our democracy,” Mr Bertholee said in a rare interview. “There are two real dangers: the first is that the hackers will be able to influence how parliament works or how our government makes decisions. That will be their aim.

“The second is that they will be able to steal business secrets that could damage our economy or give someone else an economic advantage. We must prevent that, but it’s a race to stay on top.”

Last month, it emerged that Russian hackers used 70 IP addresses in the Netherlands, mostly from servers in Amsterdam and Rotterdam, in their attack on the Democratic National Committee in the US – though the owners of the servers and the IP addresses would not have known.

“Saying IP addresses like these were used is like listing roads that thieves drove down to commit a bank robbery,” said one expert. “What’s much more important is that governments ensure our digital infrastructure is safe.”