Many residents of Dearborn, Michigan, think travel ban is a storm in a coffee cup 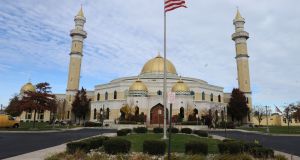 The Islamic Center of America in Dearborn, Michigan, where half the population are of Arab descent. Locals are split over the implications of the Trump travel ban. Photograph: Nova Safo/AFP/Getty Images

It would be hard to think of a place where Donald Trump’s immigration clampdown will hit harder than in Dearborn, Michigan, where people of Arab descent make up about half of the population.

It is a place where headscarves are almost as common as baseball caps, where women in hijab work out at the gym next to those scantily clad in Lycra, where the kibbeh (spiced raw meat) tastes almost as good as in Beirut. The unofficial Arab-American capital of the US prides itself on being an immigrant melting pot, where nearly everyone’s ancestors came from Lebanon or Yemen or Iraq, from Poland or Ireland or Germany. Americans of every ethnicity have lived side by side here for decades, almost always harmoniously.

But these days, passions are running high over Trump’s temporary ban on immigration from seven Muslim-majority countries, not including Lebanon, which, crucially, is the ancestral home of about half of Dearborn’s Arab population.

Even within the Arab-American community, which includes a significant number of Trump voters, reasonable people disagree about his executive order. Many think it sends a dangerous signal that Muslims and Arabs are not welcome in the US, while others think it is just a storm in a Middle Eastern coffee cup, which will soon blow over and leave cross-cultural relations unharmed.

Paul Sophiea (58) is a second-generation Lebanese American who voted for Trump. Like many of the tycoon’s supporters, he approves of the immigration restrictions even if he thinks their rollout ought to have been handled better.

Over a lunch of hummus, pita, shawarma and sleep-defeating Arab coffee, he explains why the travel ban is necessary, why it is not a Muslim ban, and why it will not harm Dearborn in the end.

In common with many Republican voters, he wouldn’t have picked Trump as his first choice, but now he is sold. And his confidence in the president has not been shaken by the travel ban even though it targets his fellow Arab-Americans.

“Arab-Americans are not monolithic in this country,” he says, carefully pouring the thick coffee from a traditional brass pot. “Depending on who you talk to, you will get different perspectives, but the one thing we all have in common is – it’s in our genes – we are business people.”

And here in the heart of the US rust belt, in a city that is home to Ford Motor Company, many voted for Trump for economic reasons. Like almost every Trump voter in Dearborn interviewed for this article – many of whom did not want to give their names – Sophiea bristles at the notion that the president’s “extreme vetting” order is anti-Muslim.

Other Trump supporters point out that the vast majority of Dearborn’s population of Arab descent are not affected directly because their countries of origin are not on the list: mainly Yemenis, Iraqis and a few Syrians are affected.

But many Arab-Americans in Dearborn condemn not just the practical impact of the order – some may not be able to host family from overseas during the ban period, and even permanent residents face lengthy interrogation at entry ports – but the fact that they feel it labels all Arabs as potential terrorists.

“I can empathise with that,” says Norma Wallis (67), a businesswoman and Trump voter. “But it’s really just a matter of taking a pause, taking a fresh look at our [immigration] policy.”

She believes it will be no more than a temporary “inconvenience” to local Arab-Americans, and will not harm good intercultural relations.

Mike Hachem (23), a first-generation Arab-American Muslim of Lebanese descent who voted for Trump, disagrees. He says the ban has made him think twice about his Trump vote.

Does the immigration crackdown make him feel less welcome in the US?

“I don’t need to be welcomed in this country. I was born in the homeland. When somebody tells me, ‘hey, you’re an Arab’, no, I put America first. I put America first in everything,” he says, over a meal of grilled kofte and sausage at Dearborn Meat Market, a Middle Eastern hostelry.

But Hachem appears to be in the minority among Trump voters in Dearborn. Chaos at the airports and protests in the streets notwithstanding, they support their president.

“That’s what I voted for: I voted for someone who said he was going to do something and actually did it,” says Wallis.

Trump appears to be on firm political ground with his supporters on this one – even here in the Arab heart of America.