US blames Russia as deadly fighting continues in Ukraine 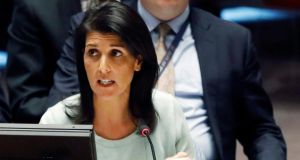 Nikki Haley: The new US ambassador to the United Nations prepares to address the security council, where she said “the dire situation in eastern Ukraine is one that demands clear and strong condemnation of Russian actions”. Photograph: EPA/Jason Szenes

Kiev has accused Russia of sending more troops and weapons into eastern Ukraine as the US renewed pressure on the Kremlin to defuse a resurgent conflict that has killed more than 30 people and injured dozens this week.

Ukrainian government forces and Russian-backed militants have deployed tanks, rocket systems and other heavy armour back to the frontline in the Donbas region, once more making a mockery of a 2015 peace plan agreed in Minsk, Belarus.

The heaviest shelling has hit the government-controlled town of Avdiivka, the neighbouring separatist-held town of Yasynuvata, and the ruined international airport outside the city of Donetsk, which is the main militant stronghold.

Both sides accuse the other of committing war crimes by targeting residential areas, and international monitors warn of a potential humanitarian crisis due to major disruption to water and power supplies during freezing weather.

“Ukrainian intelligence has detected an increase in the number of armoured vehicles, ammunition, weapons and Russian soldiers that have reached the occupied territory of Donbas via uncontrolled stretches of the border,” said Oleksandr Turchynov, the secretary of Ukraine’s national security and defence council.

Ukraine wants Moscow to allow it to re-establish control over its eastern border with Russia as a first step in implementing the Minsk plan, to ensure that Russian troops and arms cannot freely come and go from Ukrainian territory.

The Kremlin rejects that demand. It insists that Ukraine’s government first devolve power to Donbas and hold elections there to end a conflict that has killed some 10,000 people and displaced about two million since April 2014.

“We hope that the rebels have enough ammunition to respond to the aggressive actions of Ukraine’s armed forces,” Kremlin spokesman Dmitry Peskov said on Friday. Russia denies sending soldiers and weapons to aid the militants.

Russian president Vladimir Putin said this week that Ukraine’s government had provoked the escalation in fighting to bolster western support and put pressure on new US president Donald Trump to take a tough line with Moscow.

Mr Trump has advocated warmer East-West relations, but the new US envoy to the United Nations, Nikki Haley, lambasted Russia at the UN security council.

“I consider it unfortunate on the occasion of my first appearance here I must condemn the aggressive actions of Russia,” she said. “It shouldn’t happen, or be that way. We do want to better our relations with Russia. However, the dire situation in eastern Ukraine is one that demands clear and strong condemnation of Russian actions.”

“In light of the latest Russian attacks and the prospect of future aggression against Ukraine, I urge you . . . to provide defensive lethal assistance to Ukraine to defend its territory against further violations by Russia and its separatist proxies,” Mr McCain wrote in a letter to Mr Trump.

“That this surge of attacks began the day after he talked with you by phone is a clear indication that Vladimir Putin is moving quickly to test you as commander in chief. America’s response will have lasting consequences,” Mr McCain added.

Alexander Hug, deputy head of the Organisation for Security and Co-operation in Europe’s monitoring mission in Ukraine, called the number of ceasefire violations this week “unprecedented”.

He urged both sides to pull back, warning of a “potential humanitarian and ecological disaster about to unfold”.