February 3rd, 2017: Ms Conway, the US president’s former campaign manager, cited the “Bowling Green massacre” - an incident that never occurred - in an interview in which she backed the travel ban imposed on visitors from seven Muslim-majority countries. Video: MSNBC 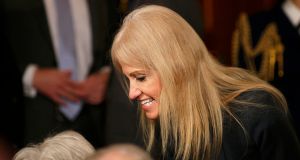 Kellyanne Conway, a senior adviser to Donald Trump, has come in for criticism and ridicule after blaming two Iraqi refugees for a massacre that never happened.

Ms Conway, the US president’s former campaign manager who has frequently faced the press to defend his controversial moves, cited the “Bowling Green massacre” – an incident that never occurred – in an interview in which she backed the travel ban imposed on visitors from seven Muslim-majority countries.

Interviewed by Chris Matthews on MSNBC’s Hardball programme on Thursday evening, Ms Conway compared the executive order issued by Mr Trump in his first week in the White House to what she described as a six-month ban imposed by his predecessor Barack Obama.

This claim has been debunked by commentators who have pointed out that the 2011 action was a pause on the processing of refugees from Iraq after two Iraqi nationals were arrested over a failed attempt to send money and weapons to al-Qaeda in Iraq.

Ms Conway told Matthews: “I bet it’s brand new information to people that president Obama had a six-month ban on the Iraqi refugee program after two Iraqis came here to this country, were radicalised and they were the masterminds behind the Bowling Green massacre. Most people don’t know that because it didn’t get covered.”

It didn’t get covered, many are now pointing out, because there was no such massacre.

The two Iraqi men arrested in 2011 did live in Bowling Green, Kentucky, and are currently serving life sentences for federal terrorism offences. But there was no massacre, nor were they accused of planning one.

The US department of justice, announcing their convictions in 2012, said: “Neither was charged with plotting attacks within the United States. ”

Some social media users also pointed out that false rumours about a Halloween massacre had circulated in several universities, including Ohio’s Bowling Green state university, in 1998.

But the likelihood that Ms Conway had Kentucky in mind was bolstered when that state’s senator Rand Paul repeated a variation of her false claim. In a separate interview with MSNBC, Mr Paul referred to “the attempted bombing in Bowling Green, where I live”.

Ms Conway had already prompted astonishment by describing comments by White House spokesman Sean Spicer that Mr Trump’s inauguration crowd “was the largest audience ever to witness an inauguration, period” as “alternative facts”.

She said she meant to say “Bowling Green terrorists” on the show.