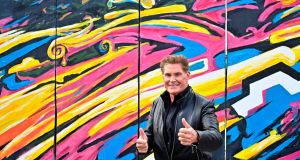 US actor and singer David Hasselhoff – The Hoff – poses during an event to promote his new audiobook Up against the Wall. Photograph: Tobias Schwarz/ AFP

Nearly three decades after the end of German division, David Hasselhoff is anxious to correct the historical record. No, he didn’t topple the Berlin Wall.

The Hoff may have spent the 1980s driving a talking car in “Knight Rider” but neither Michael Knight nor his resourceful four-wheeled sidekick KITT were able to expedite the end of socialism on German soil.

“I have absolutely nothing to do with the wall falling, that’s complete nonsense, I sang a song, nothing more,” he said, referring to “Looking for Freedom”.

Largely ignored elsewhere, the song spent eight inexplicable weeks at number one in West Germany in the spring of 1989. Some records were smuggled into East Germany, too, where the song captured their hearts as protest built against the Moscow-backed regime.

Today, with tickets to sell for a special concert next month in Berlin, Hasselhoff is anxious not to strip completely his mystique as the man whose music united a people after 40 years. “It was a hymn that gave the people in East Germany hope and I sang this song with sincerity and passion,” he told Germany’s Süddeutsche Zeitung daily.

The 67 year-old was on tour in the US when he heard Berlin’s notorious wall had been breached.

It divided 80 million people for four decades but the actor-singer told the German newspaper only four people in the world knew what the wall really meant: himself, Ronald Reagan, Bruce Springsteen and Michael Jackson.

In 1987 the American actor-turned-president, speaking at the western side of the wall, urged Soviet leader Mikhail Gorbachev to “tear down this wall”. The following year Jackson and Springsteen held concerts in West and East Berlin respectively.

Hasselhoff decided to one-up them all. Approached by German broadcaster ZDF to sing his hit song on its New Year’s Eve 1989 show, he agreed on one condition: that he could sing it on the Berlin Wall, breached just six weeks previously.

Three days after securing special permission from then chancellor Helmut Kohl, ZDF called back: the Hoff, beating Roger Waters by seven months, could play the Wall.

In the last, freezing minutes of 1989 he climbed into a cherry-picker crane before a crowd of 500,000 denim-loving Berliners with hairstyles echoing another 1980s TV star: MacGyver.

With the Brandenburg Gate as a backdrop, and a show-masterly flick of a switch, the Hoff’s jacket lit up in a sea of fairy lights. Weeks earlier this was No Man’s Land, but now it was showtime.

Heading back to Berlin three decades on, the Hoff admits he’s “not the greatest singer and I don’t have the greatest songs”. Even Baywatch, he suggests, “would never have been so successful without me, the scripts were really bad”.