Art piece, valued at £1m, was on display at Winston Chuchill’s birthplace in Oxfordshire 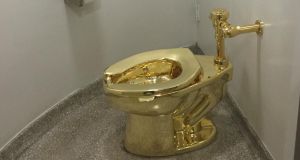 Police are investigating a break-in at Blenheim Palace in England, the ancestral home of the Churchill family, amid reports a golden toilet valued at £1 million was stolen. Photograph: William Edwards/AFP/Getty Images. 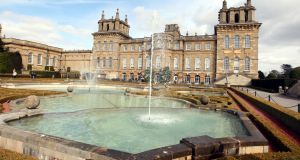 The gold toiley - part of an art exhibition on show at Winston Churchill’s birthplace, Blenheim Palace - was apparently taken in the early hours of Saturday. File photograph: Steve Parsons/PA Wire.

Police are searching for a solid gold toilet stolen from the birthplace of Winston Churchill in England.

The toilet — valued at £1 million and installed as part of an art exhibition at Blenheim Palace — was taken in the early hours of Saturday, Thames Valley Police have confirmed. The force said it was called to reports of a burglary at the Oxfordshire estate shortly before 5am.

Det Insp Jess Milne said: “The piece of art that has been stolen is a high value toilet made out of gold that was on display at the palace.

“The artwork has not been recovered at this time, but we are conducting a thorough investigation to find it and bring those responsible to justice.”

A 66-year-old man has been arrested in connection with the incident.

The palace has suffered significant damage and flooding following the burglary, because the toilet, designed by Italian artist Maurizio Cattelan, was plumbed in and was available for visitors to use.

Blenheim Palace chief executive Dominic Hare urged anyone with any information about the theft to contact police.

“We are saddened by this extraordinary event, but also relieved no-one was hurt,” he said.

“We knew there was huge interest in the Maurizio Cattelan contemporary art exhibition, with many set to come and enjoy the installations.

“It’s therefore a great shame an item so precious has been taken, but we still have so many fascinating treasures in the palace and the remaining items of the exhibition to share.”

Last month, ahead of the toilet’s installation, the Duke of Marlborough’s half-brother, Edward Spencer-Churchill, said the lavatory wouldn’t be “the easiest thing to nick”.

Mr Spencer-Churchill told the Times: “”Firstly, it’s plumbed in and secondly, a potential thief will have no idea who last used the toilet or what they ate.

Blenheim Palace was closed on Saturday following the burglary.

EventSite Design, who work at the site, said on Twitter: “We’ve had some drama overnight which I won’t elaborate on just yet but it has meant we need to redirect our contractor traffic for the day.” - PA