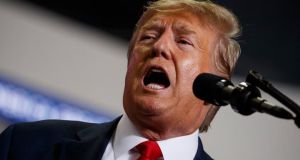 US president Donald Trump’s announcement will heap further pressure on a country which has been struggling economically. Photograph: Evan Vucci/AP

The United States is to impose new economic sanctions on Iran, significantly increasing economic pressure on the country. “I have just instructed the Secretary of the Treasury to substantially increase Sanctions on the country of Iran!” President Donald Trump tweeted from California, where he was attending campaign events on Tuesday.

Mr Trump did not give further details on the new sanctions.

But the measures will heap further strain on a country which has been struggling economically following the Trump administration’s decision to withdraw from the 2015 nuclear deal last year and reimpose sanctions.

Nonetheless, the decision to impose new economic measures could be a signal that the Trump administration is not considering military action against the regime in the wake of last Saturday’s missile and drone attacks on oil facilities in Saudi Arabia.

The possibility of an armed response also appeared to recede on Wednesday as Saudi Arabia stopped short of directly blaming Iran for the attacks.

But an adviser to Iranian president Hassan Rouhani said following the press conference that it proved that Saudi Arabia “knows nothing”.

I am pleased to announce that I will name Robert C. O’Brien, currently serving as the very successful Special Presidential Envoy for Hostage Affairs at the State Department, as our new National Security Advisor. I have worked long & hard with Robert. He will do a great job!

I have just instructed the Secretary of the Treasury to substantially increase Sanctions on the country of Iran!

Iran again denied responsibility on Wednesday. “They want to impose maximum . . . pressure on Iran through slander,” Mr Rouhani said. “We don’t want conflict in the region.”

There were reports from Tehran that the Iranian delegation may skip next week’s United Nations General Assembly in New York, further suggesting that a meeting between Mr Trump and Mr Rouhani is highly unlikely.

Iran’s supreme leader Ayatollah Ali Khamenei said on Twitter this week that “no negotiation will take place between the officials of the Islamic Republic and the US at any level, whether in New York or anywhere else,” a reference to next week’s New York gathering.

Mr Trump also suggested that a meeting is unlikely.

“I’m not looking to meet him. I don’t think they’re ready yet. But they’ll be ready,” he said. “At the right time, they’ll be ready. I never rule anything out, but I prefer not meeting him.”

The United States believes Iran is behind the two attacks on Saudi Arabian oil fields last weekend, though it says it is awaiting the results of an investigation. Yemeni Houthis claimed responsibility for the attacks that struck at the heart of Saudi’s oil infrastructure.

The build-up of tensions came as secretary of state Mike Pompeo met Saudi crown prince Mohammed bin Salman in Jeddah on Wednesday from where he will travel on to the United Arab Emirates.

While production has resumed at one of the facilities, it may be November before Saudi Arabia’s full production capacity is restored.

The Trump administration has delivered mixed messages on Iran in recent months. The US president cancelled a military strike on Iranian targets in July after an unmanned drone was shot down over the Straits of Hormuz.

Last week, there were reports that the US was considering easing sanctions on Iran in order to encourage Tehran to come to the negotiating table, possibly at the United Nations in New York next week.

Mr Trump also spoke of the US being “locked and loaded” as it considers its response to the weekend strikes.