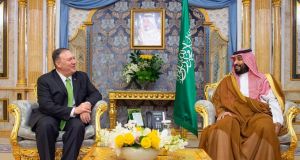 US secretary of state Mike Pompeo accused Iran of carrying out an “act of war” - the strongest condemnation yet by a US official of last weekend’s attack on Saudi oil facilities.

“This was an Iranian attack,” Mr Pompeo said following his meeting with Saudi crown prince Mohammed bin Salman in Jeddah, noting that the intelligence community has “high confidence that ... these were not weapons that would have been in the possession of the Houthis.”

He said that Saturday’s attack was “of a scale we’ve just not seen before.”

His comments came as Iran said any attack on Iranian territory would be met with a “rapid and crushing” response, according to the Fars News Agency.

The ratcheting-up of tensions comes after US president Trump announced new economic sanctions on Iran, significantly increasing economic pressure on the country. Mr Trump did not disclose details of the sanctions which will be confirmed by the Treasury in the coming days.

But the measures will heap further strain on a country which has been struggling economically following the Trump administration’s decision to withdraw from the 2015 nuclear deal last year and reimpose sanctions.

Nonetheless, the decision to impose new economic measures could be a signal that the president is moving away from considering military action against the regime in the wake of last Saturday’s oil attacks in Saudi Arabia. Wrapping up a two day visit to New Mexico and California on Wednesday, Mr Trump appeared to equivocate about his next move. “It’s very easy to attack but ... how did Iraq work out?” he said, following criticism from Republican ally Lindsey Graham who has called for “decisive action.”

Saudi Arabia, in its first public comments on the attacks, stopped short of directly blaming Iran.

But an advisor to Iranian president Hassan Rouhani said following the press conference that it proved that Saudi Arabia “knows nothing.”

There were reports from Tehran that the Iranian delegation may skip next week’s United Nations general assembly in New York, amid problems securing visas, further suggesting that a meeting between Mr Trump and president Hassan Rouhani is highly unlikely.

Iran’s Supreme Leader Ayatollah Ali Khamenei said on twitter this week that “no negotiation will take place between the officials of the Islamic Republic and the US at any level, whether in New York or anywhere else,” a reference to next week’s New York gathering.

Mr Trump also suggested that a meeting is unlikely.

“I’m not looking to meet him. I don’t think they’re ready yet. But they’ll be ready,” he said. “At the right time, they’ll be ready. I never rule anything out, but I prefer not meeting him.”

The United States believes Iran is behind the two attacks on Saudi Arabian oil fields last weekend, though it says it is awaiting the results of an investigation. Yemeni Houthis claimed responsibility for the attacks that struck at the heart of Saudi’s oil infrastructure.

The build-up of tensions came as secretary of state Mike Pompeo met Saudi crown prince Mohammed bin Salman in Jeddah on Wednesday from where he will travel on to the United Arab Emirates.

While production has resumed at one of the facilities, it may be November before Saudi Arabia’s full production capacity is restored.

The Trump administration has delivered mixed messages on Iran in recent months. The US president cancelled a military strike on Iranian targets in July after an unmanned drone was shot down over the Straits of Hormuz.

Last week, there were reports that the US was considering easing sanctions on Iran in order to encourage Tehran to come to the negotiating table, possibly at the United Nations in New York next week. Similarly, he spoke of the US being “locked and loaded” as it considers its response to the weekend strikes, though has appeared to retreat from that veiled threat in recent days.

He is currently the state department’s top hostage negotiator and recently travelled to Sweden to negotiate the release of rapper A$AP Rocky.

A lawyer by training, he is viewed as a mainstream Republican figure. He served under the George W Bush administration, and also advised former presidential candidates Mitt Romney and Ted Cruz. He has previously written about the threat from China and Russia to the United States.

Mr Trump was effusive about his new pick. “I have worked long & hard with Robert. He will do a great job!”, he said. It is understood that the US president was impressed by his work in securing the release of US hostages in Turkey and elsewhere. Mr O’Brien has also publicly praised the president, stating that he has had “unparalleled success in bringing Americans home without paying concessions.”