Worldwide cases increase to more than 1.3m as death toll in US hits 10,000 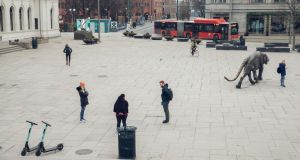 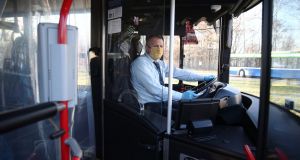 The coronavirus is under control in Norway, the country’s health minister said on Monday, pointing to the low rate of transmission of the disease.

A person carrying the virus, also known as Covid-19, in Norway contaminates now on average 0.7 other individual, Bent Hoeie told a news conference. The government’s goal was to limit the spread to maximum one other person.

The government will decide on Wednesday whether to extend ongoing restrictions, including the closures of schools and nurseries, beyond mid-April.

Worldwide, more than 1.3 million people have been confirmed infected and over 70,000 have died, according to Johns Hopkins University.

In the United Kingdom, prime minister Boris Johnson has been moved to intensive care in a London hospital as his symptoms of the virus worsened. Queen Elizabeth told the British people on Sunday that they would overcome the outbreak if they stayed resolute in the face of lockdown and self-isolation.

The death toll from coronavirus in the United States topped 10,000 on Monday, according to a Reuters tally.

The United States has the third-highest number of reported deaths from the disease in the world, exceeded only by Italy with 16,523 and Spain with 13,055.

White House medical experts have forecast that between 100,000 and 240,000 Americans could be killed in the pandemic, even if sweeping orders to stay home are followed.

Earlier on Monday, the US entered what an official called the “peak death week” of the coronavirus on Monday while a watchdog report said hospitals were struggling to maintain and expand capacity to care for infected patients.

Particular alarm was raised for the states of New York, New Jersey, Connecticut and the city of Detroit.

US president Donald Trump, who has oscillated between issuing dire warnings and expressing optimism that contradicts the views of his medical experts, tweeted “USA STRONG!” and “LIGHT AT THE END OF THE TUNNEL!” on Monday. Mr Trump has deferred to state governors for issuing stay-at-home orders.

Deaths in Canada jumped by just over 20 per cent to 258 in a day, officials said on Sunday, while Ottawa offered full-time jobs to reservists in the armed forces.

Panama on Sunday said total cases stood at 1,988, a rise of 187 cases from a day earlier. The number of deaths increased by eight to 54.

In Portugal, a total of 15 elderly people died from coronavirus at a care home in the city of Aveiro, the worst case in a single home since the outbreak hit the southern European nation, the city’s mayor Ribau Esteves said on Monday,

Mr Esteves told local news agency Lusa that 77 other residents and 22 staff members had tested positive last week, and guaranteed all necessary preventive measures were taken, including creating a separate area for those infected.

Mr Esteves blamed the national health authority DGS, saying it failed to send enough swabs to his municipality. The mayor said there were currently no resources to test residents at other care homes.

“Our hospital has nothing,” Mr Esteves told Portuguese broadcaster RTP.

Portugal has reported 11,730 confirmed cases of the virus so far, with 311 deaths.

Spain’s pace of new virus deaths slowed for the fourth day on Monday as the government contemplated a gradual easing of a lockdown in place since mid-March in the nation with the second highest death toll from the global pandemic.

The country’s health ministry reported 637 new deaths for the previous 24 hours, the lowest fatality toll in 13 days, for a total of more than 13,000 since the pandemic hit the country.

Monday’s data showed Spain’s total cases up to 135,032, the highest in Europe and second in the world after the United States.

Data in Spain is giving cause for hope the peak has passed. This new data represents a 5 per cent increase in total and less than half the pace recorded a week earlier.

Spain has been in lockdown since March 14th, with streets and famous tourist sites eerily silent.

France’s coronavirus figures on Monday showed that the rate of increase in fatalities - now at almost 9,000 - sped up again after several days of slowing, while the increase in people needing intensive care continued to decelerate.

The total number of cases, combining hospital and nursing home statistics, increased by 5,171 over the last 24 hours to 98,010, meaning France will likely become the fifth country, after Italy, Spain, the United States and Germany, to cross the 100,000 threshold on Tuesday.

“The pandemic hasn’t stopped expanding. The figures prove it,” health minister Olivier Veran said, adding that the government had decided to mass screen nursing homes which account for about 27 per cent of the total death toll.

Some health officials had suggested on Sunday that French people appeared to comply less strictly to the national lockdown than in other countries.

France started including data from nursing homes last Thursday, which partially explains why the official number of deaths has more than doubled since Wednesday.

Italy’s day-to-day increase in new cases dipped again, for the lowest one-day increase in early three weeks. The country, ravaged by the virus, also saw a drop for the third straight day in intensive care beds occupied by infected patients.

Italy still has, by far, the world’s highest coronavirus death toll - over 16,500 - but the pressure on intensive care units in the north has eased so much that the region is no longer airlifting patients to other regions.

South Korea reported fewer than 50 new coronavirus cases for the first time since its peak in late February, earning the praise of the World Health Organization (WHO) for combatting the spread in one of the first countries to be hard-hit by the disease.

The Korea Centers for Disease Control and Prevention said there were 47 new infections as of midnight on Sunday compared with 81 recorded a day earlier, taking the national tally to 10,284.

South Korea has been bringing the epidemic under control, with about 100 or fewer new daily cases for the past month, but this was the first time the daily tally of new cases was less than 50 since 909 were reported on February 29th.

Singapore on Sunday said it had quarantined nearly 20,000 workers in two dormitories, made up of mainly Bangladeshi and other south Asian manual workers, after they were linked to at least 90 infections.

To combat rising virus cases, Singapore has advised its residents to stay home, not socialise and maintain a metre distance between each other if they have to go out for essential activities like shopping.

Japan is to impose a state of emergency in Tokyo and six other prefectures as early as Tuesday to contain the coronavirus, while the government prepares a $990 billion (€916 billion) stimulus package to soften the economic blow.

Domestic infections topped 4,000, Jiji news reported, and 93 have died. The numbers keep rising, with particular alarm over the spread in Tokyo, which has more than 1,000 cases including 83 new ones on Monday.

An emergency, which prime minister Shinzo Abe said would last about a month, will give governors authority to call on people to stay at home and businesses to close.

Mainland China reported 39 new cases on Sunday, all but one of them imported from abroad, up from the 30 reported a day earlier. The National Health Commission said 78 new asymptomatic cases had been identified by the end of Sunday, compared with 47 the day before. Only one new death was recorded on April 5th.

India is struggling to ramp up testing for the coronavirus, but in few places would the odds of containing the disease appear so bleak should domestic transmission start to multiply.

Since India’s first case was confirmed on January 30th, India has conducted only a little over 96,000 tests, having focused efforts on identifying those who had come in contact with people who have tested positive.

The results show 4,067 people are infected, and 107 have died of the respiratory disease.

Officials believe a three-week nationwide lockdown ordered by prime minister Narendra Modi will have slowed the spread of the virus in communities.

Bangladesh and Nepal moved on Monday to further restrict people’s movements in the hope of containing the virus.

Afghanistan has had 367 cases from the 2,737 people it has tested. The western border province of Herat has suffered the worst outbreak, as thousands of Afghans returned in recent weeks from Iran, where the virus has hit hard.

Pakistan’s health ministry said it had conducted 35,875 tests so far, based on a policy of testing only those people with a suspect travel history, direct exposure to someone who has tested positive or showing acute symptoms with an underlying history of health problems.

Brazil’s lower house of congress approved a constitutional amendment for a “war budget” to separate coronavirus-related spending from the government’s main budget and shield the economy as the country surpassed 10,000 confirmed cases.

About 20 million jobs are at risk in Africa as the continent’s economies are projected to shrink this year due to the impact of the pandemic, according an African Union study.

In Kenya, president Uhuru Kenyatta banned all road, rail and air travel in and out of the capital, Nairobi, and three other regions at the coast that are the epicenter of the virus outbreak in the nation.

The country has 158 confirmed coronavirus cases and six deaths.

Dubai imposed a two-week lockdown and Saudi Arabia sealed off parts of the Red Sea city of Jeddah as Gulf states tightened measures in big cities.

Franciscan friars wearing surgical masks and gloves made house calls in Jerusalem on Palm Sunday, delivering olive branches to Christians who are self-isolating.

Carnival Corp’s troubled Ruby Princess cruise liner, the biggest single source of Australia’s 5,687 Covid-19 cases, docked at a port on Australia’s east coast on Monday to help remove crew who need urgent medical treatment and to refuel the ship to send it away. – Agencies