The difference between Ebola and coronavirus outbreaks? Lack of resources

With West struggling to control the pandemic, developing nations are getting less help 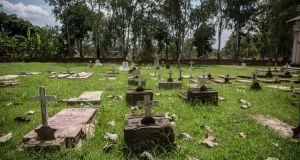 A cemetery where people who died of Ebola in the 2000-2001 outbreak are buried in Gulu, Uganda. Photograph: Sally Hayden

Doctors who successfully fought Uganda’s Ebola outbreak, and are now working on the coronavirus pandemic response, say while there are transferable lessons the biggest problem this time is a lack of resources.

“This thing, we pray it doesn’t come here,” said Opwonya John, a senior clinical officer and member of Gulu’s coronavirus task force. “Human resources are there but they need help.”

Gulu, a city in northern Uganda, battled an Ebola outbreak between 2000 and 2001, in which 224 people died and more than 400 were treated. At the time, it was the largest Ebola outbreak ever recorded.

The region was in the middle of a brutal war, yet hundreds of people volunteered to help with Ebola contact tracing. Authorities used walkie-talkies to talk to each other.

Ebola is less contagious than Covid-19, but much more deadly. It transmits only through bodily fluids, rather than in the air, and can lead to a fever, vomiting blood and death by organ failure.

Mr John said structures are key. “The World Health Organisation sent a big team. There was a strong task force, sub-county leaders and [there was] another task force at village level. We had strong communications. There was no greeting, no touching people,” he recalled.

However, this time they’re struggling to get supplies, particularly personal protective equipment. “During Ebola money was plenty. Ebola was fought very hard. In two months [of coronavirus], we have not got a single coin from the government,” he said.

In Gulu, one charity is now collecting two-litre soda bottles to make face shields for health workers. There are only six ICU beds with ventilators across two hospitals, serving roughly two million people. There are 55 ICU beds across the whole of Uganda, which has a population of more than 42 million.

Last week, a man suspected of having coronavirus escaped from Gulu hospital, claiming he had been left in isolation without food for three days (he was later found and tested negative).

With countries in the West struggling to control the pandemic, developing nations are being given less support than they might usually expect. There are now more than 10,000 cases across Africa, and almost every country is affected.

Though it only has 52 confirmed cases, Uganda has banned all transport, a move announced by President Yoweri Museveni with only one hour notice.

The news caught Gulu’s task force unawares. Local media has since been carrying reports of pregnant women losing babies, dying themselves or delivering on the roadside because they can’t get to hospital for treatment. “That is the biggest challenge now,” Mr John said.

“Vehicles can be a problem,” said William Onyayi, Gulu’s district health educator. The coronavirus task force only has five vehicles between them, for contact tracing, checking on suspected cases and taking people to hospital. They have two thermometers, he said, while electricity is unreliable and local leaders often don’t have phones.

With Ebola, “everyone was informed”, Mr Onyayi said. “When someone sees someone exhibiting signs and symptoms they would report immediately.” This time, he said, they’ll need help.