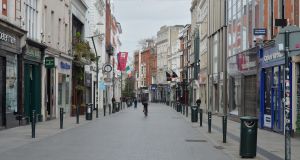 Business activity in Dublin dropped to a seven-year low in the last quarter as the coronavirus pandemic saw output grind to a halt.

The Q1 Dublin PMI, published by at IHS Markit on Tuesday, showed activity fell to 49.9 from 53.7, signalling a stagnation in business output in the capital since the outbreak of coronavirus, also known as Covid-19. The 50 mark separates growth from contraction.

The result for Dublin during the quarter ended more than seven years of continuous output growth in the capital.

Manufacturing moved into outright decline with the services and construction sectors, which had stronger momentum in the first two months of the quarter, slowing but just managing to remain in expansionary territory for the quarter as a whole.

However, IHS said it expects both of these sectors to suffer accelerated losses in output as the social distancing policies, which were extended to all non-essential businesses at the end of the month, take hold.

Furthermore, the slowdown looks set to accelerate in the second quarter with new orders in Dublin decreasing for the first time since the third quarter of 2012 as customer demand seized up and staffing levels at Dublin companies fell at the end of March.

IHS said the latter echoes the March live register figures which saw those looking for income support nationally rising to a new record of more than 513,000.

Andrew Harker, economics director at IHS Markit, said Dublin had been buffered somewhat by strong performances in the months leading to the outbreak of the pandemic.

“The Covid-19 pandemic pushed Dublin economic output into contraction in March, resulting in a stagnation across the first quarter as a whole after growth had been recorded in the first two months of the year,” he said.

“This in itself was the worst performance for over seven years. A decline in March was enough to push the manufacturing sector into contraction for the first quarter as a whole, but the Covid-19 lockdown is substantially impacting the services and construction sectors as well.

“Prior to the outbreak, companies in the capital had been enjoying solid increases in output, meaning that the data for the first quarter has held up better than in the rest of Ireland.

“The effects of the pandemic are clearly going to be felt all over the country though, with the economy suffering a deep contraction at present.”

1 Should my mam wait for house prices to drop before buying?
2 Covid-19 mortgage breaks: What’s the catch?
3 Brother is dragging his heels as executor of uncle’s will - is there anything I can do?
4 Almost 70% of home buyers to purchase within next year
5 Dublin drops out of top 50 in ranking of best cities for start-ups
6 Cheers: Conor McGregor's whiskey races up the sales chart
7 Revenue faces US drug company Perrigo over disputed €1.64bn tax bill
8 Covid-19 takeover of private hospitals to cost insurers €180m
9 Health insurers take a hit, Perrigo vs Revenue and mortgage breaks examined
10 Coronavirus: Workplaces review office design with view to return
Real news has value SUBSCRIBE