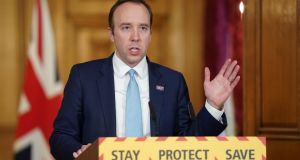 UK health secretary Matt Hancock: “Our ultimate goal is that anyone who needs a test can have one.” Photograph: Pippa Fowles/Handout/EPA

Britain has promised to test 100,000 people a day for coronavirus by the end of April, 10 times the current level, amid mounting criticism over its strategy in fighting the disease.

Health secretary Matt Hancock told a press briefing in Downing Street that research institutions and private firms would help to expand the testing programme, which has lagged behind other European countries.

“Our ultimate goal is that anyone who needs a test can have one. The new national effort for testing will ensure that we can get tests for everyone who needs them and I am delighted that the pharmaceutical industry is rising to this challenge, putting unprecedented resources into testing,” he said.

“Taken together, I am now setting the goal of 100,000 tests per day by the end of this month. That is the goal and I am determined that we will get there.”

The announcement of a new target for testing came as Britain recorded its highest daily death toll from coronavirus, with 569 people reported to have died in a single day. A total 2,921 people have died from coronavirus since the epidemic began and the number of new cases of the disease and hospital admissions continues to rise.

Mr Hancock was making his first appearance in public since he tested positive for the coronavirus and spent seven days in self-isolation. Boris Johnson, who also tested positive for the virus last week, will have finished seven days in self-isolation on Friday but his official spokesman said the prime minister still had symptoms and suggested he might stay at home for longer.

Mr Hancock said that Britain lacked the large diagnostics industry that enabled Germany to scale up testing at the start of the epidemic. But he said Britain would build a diagnostics industry with the help of pharmaceutical companies, as part of a five-point plan to increase testing for coronavirus.

Public Health England will continue to conduct swab tests for antigens to show if people are currently infected with the virus. These tests will be supplemented by commercial partners, universities and private businesses like Amazon and Boots pharmacies.

Another project will focus on surveillance to find out what proportion of the population has been infected and to track the spread of the virus.

Mr Hancock said the government has purchased 17.5 million antibody tests that could show that someone has had the virus and has developed some immunity to it, but they were being checked to make sure they worked.

“The early result of some of them has not performed well. But we are hopeful that they will improve and that the later tests that we have got our hands on will be able to be reliable enough for people to use them with confidence,” he said.