Royal Ascot to take place behind closed doors in June 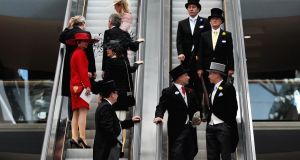 The shape of the British Flat racing season has been turned askew due to the Covid-19 pandemic after Tuesday’s announcements that the first four Classics have been pushed back and that Royal Ascot will take place behind closed doors.

Jockey Club Racecourses, which owns Newmarket and Epsom, announced that both Guineas races scheduled for May 2nd and 3rd, and the Oaks and the Derby on June 5th and 6th, will not take place on their scheduled dates and have been pushed back to later in the campaign.

Separately Ascot’s authorities confirmed that its world famous royal meeting in June, one of the highlights of Britain’s social calendar with up 70,000 people attending daily, will only go ahead behind closed doors.

“For public health and safety reasons we have reached the difficult but unavoidable conclusion that Royal Ascot 2020 (June 16-20) will not be able to take place as an event open to the public.

“It may prove possible to run the Royal Ascot races behind closed doors, dependent on government and public health policy and the approval of the BHA for us to restart racing,” a statement said.

The British Horseracing Authority has maintained its determination to be ready to resume racing on May 1st, the day before the Qipco 2,000 Guineas was due to take place, but that is far from certain.

However, the early decision has been taken that the coronavirus pandemic makes the outlook too uncertain for an effective Classic campaign to begin.

Amy Starkey, spokeswoman for Newmarket, said: “With less than a month until the Qipco Guineas Festival, trainers need to know whether to step up preparations for their Guineas horses or put that on pause for a later date.

“The future is too uncertain at the moment and there is no opportunity for any preparation races before such important contests for the 2020 Classic generation.

“Therefore we feel now is the right time to take the decision to cancel the Guineas Festival and turn our attention to determining, in conjunction with the BHA, participants and stakeholders, the earliest possible opportunity to reschedule the 2000 Guineas and the 1000 Guineas.”

The four Classic races are at the core of the Pattern race system and also have huge implications for the breeding industry. They will be rescheduled “once racing has resumed in Britain”.

The situation at Epsom is complicated by how the downs are a public space and government guidelines on social distancing make hosting the Derby and Oaks behind closed doors impractical.

An Epsom spokesman said: “Following consultation with our many event stakeholders and in order to comply with current government guidance, given the unique nature of the Downs as a public space, sadly it is not practical to stage the Investec Derby Festival on June 5 and 6.

“We are now working with the sport to explore our options to reschedule, at minimum, the Derby and Oaks, as part of delivering the 2020 Classic programme for three-year-olds. We thank all involved for their pragmatism and patience as we work this through together.”

Although there are no dates for the Classics to be rescheduled Jockey Club Racecourses said they hope to have adequate spacing between the two Classic meetings at Newmarket and Epsom when they occur. The gap is currently six weeks.

Racing stopped in Britain on St Patrick’s Day, six days before the sport also ground to a halt in Ireland.

Asked if maintaining the scheduled gap between the English and Irish Classics could be done, HRI’s chief executive Brian Kavanagh said on Tuesday evening: “Ideally yes. But I don’t think we’ll have the luxury of all countries coming back [racing] at the same time.

“It depends on different national situations. We will look at all those issues and then take them into account.

“There are no implications at the moment in terms of our position. Our situation is still as it was, that we remain racing ready. As time moves on we will see what the national overall situation is with the crisis. That’s the priority.

“When that improves we will be ready to move with the racing programme.”

The latest move to push back the Classics has major implications for a number of Ireland’s leading trainers including Aidan O’Brien, who holds a record 10 victories in the 2,000 Guineas.

On Tuesday he indicated he was considering a trio of colts – Arizona, Armory and Wichita – for the colts’ Classic with the filly Love in contention for the 1,000 Guineas.

O’Brien also pointed to the importance of Europe’s Pattern race system amid some uncertainty about whether or not potential travel restrictions on racehorses might be imposed as part of any conditions for resumption of racing in different countries.

Horse Racing Ireland’s chief executive, Brian Kavanagh, who is also chairman of the European Pattern Committee, has said travel restrictions on racehorses travelling between jurisdictions may have to be applied in the event of racing starting again.

“There’s nothing definite but certainly talking to other racing authorities internationally the idea of domestic only competition is something that is on their minds. It may be something that is a requirement,” he said.

“Domestic only” competition would be a significant blow for Europe’s Classics and Group One races. It would restrict such valuable races to horses trained in that particular country.

“The whole Pattern race system is all based on competition between all the countries and always has been.

“We support races all over Europe all the time and I think for the Pattern committee, and the races, it’s probably vital that it stays open,” O’Brien said.

Jessica Harrington, who has a number of leading contenders for the fillies’ Classics, said: “It’s very difficult. Difficult times need difficult answers and things won’t be the same again.

“It’s very hard to see a restricted Group One race but then again we’ve got to think outside the box. It’s a hard one because we all want to get back racing. It’s just how we get back racing.”

1 Sideline Cut: Vignette shows why Bird is the true shark in The Last Dance
2 Farrell and O’Connell provide insight into changes in Ireland’s analysis
3 Liverpool and Everton to oppose plans to play games at neutral venues
4 Niyi Adeolokun and Tom McCartney among Connacht departures
5 Munster braced for worst of financial crisis due to Thomond Park debt
Real news has value SUBSCRIBE

GAA preparing for earlier return to activity but pitches to remain closed 18:07
HRI announces full jumps programme up to start of August 17:03
La Liga season to restart on June 11th with Sevilla-Real Betis derby 16:26
Liverpool and Everton to oppose plans to play games at neutral venues 17:18
Niyi Adeolokun and Tom McCartney among Connacht departures 13:00
Here is your handy guide to sport on television this week