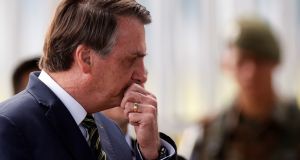 Brazil’s president Jair Bolsonaro: “The generals in the palace know Bolsonaro is completely out of his depth. He is the wrong man in the wrong place at the wrong time,” says political consultant André Pereira César. Photograph: Adriano Machado/Reuters

Despite Brazil now tracking the UK’s trajectory for increases in new coronavirus cases, president Jair Bolsonaro remains resolutely focused on undermining his own administration’s efforts to contain the pandemic’s spread.

After last week twisting WHO advice on combatting the virus, this week he has turned to attacking his own health minister. An orthopaedic surgeon, Dr Luiz Henrique Mandetta is widely viewed within government and among the population as having confronted the crisis with the seriousness required.

An unknown political neophyte before the pandemic broke out, his approval ratings now match the 76 per cent of the public who back his call to stay at home and practise social distancing.

This clearly infuriates Bolsonaro. He seems unable to view the pandemic as anything other than a threat to his grip on power. He has publicly said if the economy sinks his government is over, and so has waged a relentless campaign to get Brazil back to work, even stooping to disseminating fake news in support of it.

But his efforts have been stymied by Mandetta, who says now is not the time to relax in the face of the virus and called on people to remain at home. The big hitters in cabinet have fallen in behind him rather than the president.

As a paranoid narcissist who knows Brazil’s establishment views him as over-promoted, Bolsonaro was never going to take this lying down. In 15 months in office he has been ruthless in ensuring that no one in his administration outshines him. Those who do are fired or publicly humiliated.

In recent days, even as the pandemic spread across the country, Bolsonaro was criticising Mandetta for “lacking humility” and warning at the weekend that the time would come for anyone in his government “who suddenly have become stars”.

The minister’s time appeared to arrive on Monday when Brasília was awash with rumours that the president had indeed fired him with the official notification imminent.

Aware of the impact this would have on a nervous population, the heads of the senate and supreme court mobilised to keep Mandetta in his post. They reportedly found support among the military men Bolsonaro has surrounded himself with in the presidential palace.

Headed by his cabinet chief, General Walter Braga Netto, this group is variously reported to be attempting to protect the president from himself or so horrified that a lowly captain is behaving this irresponsibly that they are working to isolate him from real power lest he do more damage.

“The generals in the palace know Bolsonaro is completely out of his depth. He is the wrong man in the wrong place at the wrong time and they are trying to erect a cordon sanitaire around him, to turn him into a kind of queen of England, ” says political consultant André Pereira César.

Monday’s mobilisation by Brasília’s elite means Mandetta remains in his job for now. But this only appears to have fed the paranoia among the president’s online supporters, headed by his son Carlos, who commands the family’s social media operation, that the generals are plotting against his father.

Given the challenge posed by the pandemic, there is almost no capacity currently within Brazil’s political system for removing Bolsonaro from office. But the costs of his presidency are piling up.

Even as the crisis surrounding Mandetta deepened, Brazil’s education minister was racially insulting China, the country’s biggest trading partner. In a tweet which mocked Chinese accents, Abraham Weintraub insinuated the Asian nation would emerge strengthened from the current crisis.

Many Bolsonaro supporters have shared conspiracy theories online about the coronavirus being a Chinese plot to achieve world domination. A furious Beijing reacted by saying it would cut purchases of Brazilian soy beans “for security reasons”.

The demands of dealing with the crisis might insulate the president and acolytes like Weintraub for now. But once the pandemic recedes, capacity will return to the political system. And then there will be pressure in Brasília to turn to the various impeachment motions now sitting in Congress waiting for consideration.