April 7th, 2020: British foreign minister Dominic Raab says that he is confident that prime minister Boris Johnson, in intensive care with a coronavirus infection, would pull through because "he's a fighter." 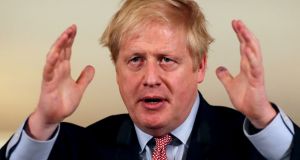 Boris Johnson remained in intensive care at a London hospital on Tuesday night in what Downing Street described as a stable condition, as Britain recorded its biggest daily death toll from coronavirus.

The prime minister, who was moved into intensive care on Monday evening, has been receiving oxygen treatment but has not been put on a ventilator.

“The prime minister has been stable overnight and remains in good spirits. He is receiving standard oxygen treatment and is breathing without any other assistance. He has not required mechanical ventilation or non-invasive respiratory support,”Mr Johnson’s official spokesman said.

The spokesman said the prime minister, who tested positive for Covid-19 almost two weeks ago, was not suffering from pneumonia and remained in good spirits. Cabinet office minister Michael Gove said on Tuesday that he was self-isolating after a family member reported symptoms of the coronavirus.

Foreign secretary Dominic Raab, who is deputising for the prime minister while he is in hospital, chaired a daily ministerial meeting about coronavirus and took questions at a press conference in Downing Street.

“I think it is probably worth just remembering that as will be the case for many people up and down the country who know someone at work who has fallen ill with the coronavirus it comes as a shock to all of us.  He is not just the prime minister to all of us in cabinet. He is not just our boss. He is also a colleague and he is also our friend,” he said.

Mr Raab avoided answering questions about the limits of his authority over ministers in the event of a dispute while the prime minister is ill.

“I have got total confidence in the arrangements that the prime minister has put in place so that I can discharge the responsibility for him, deputising for him while he is out of action and obviously we hope that will be for a very limited period of time,” he said.

Britain’s death toll from coronavirus has risen to 6,227, with 786 new deaths confirmed on Tuesday, the highest number in a single day since the epidemic began. Chief scientific officer Patrick Vallance said the number of admissions to intensive care (ICU) appeared to be slowing, however, adding that Britain was “on track” compared with other countries.

“It is possible we are seeing the start of a change with numbers flattening off, we won’t be sure about that for a week or so. It does begin to suggest that things might be moving in the right direction.”

Britain has been tracking the high level of deaths from coronavirus in countries like Italy but chief medical officer Chris Whitty acknowledged that other countries, such as Germany, had suffered less from the epidemic.

“We all know Germany got ahead in terms of its ability to do testing for the virus and there’s a lot to learn from that. We have been trying to learn the lessons from that,” he said.

Miriam Lord: Dáil stuck in limbo ahead of loosening and talks conclusion