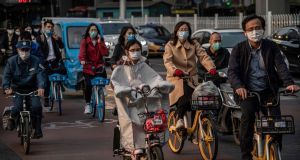 China reported zero new coronavirus deaths on Tuesday for the first time since it started publishing daily figures in January, a milestone that offers grounds for some relief as the country works to stave off a second wave and struggles with ongoing outbreaks in Wuhan.

The National Health Commission reported 32 new cases across China on Tuesday, all of them imported infections, bringing the number of cases involving overseas travellers to 983.

The country has reported 81,740 confirmed cases, and 3,331 deaths, although there is some scepticism on the veracity of the data – including from US president Donald Trump, who said recently “their numbers seem to be a little on the light side”.

China only began disclosing the number of asymptomatic cases for the first time last week, amid public concerns the numbers were being downplayed and “silent carriers” were still spreading the virus in communities.

Officials reported 30 new asymptomatic infections on Tuesday, bringing the number of asymptomatic cases currently under medical supervision to 1,033, with a large number of them in the outbreak’s epicentre of Wuhan.

As the rates of infection in Wuhan dropped in recent weeks, authorities began easing restrictions and designated more than 7,000 residential compounds “epidemic-free”, meaning residents could come out for two hours a day.

On Wednesday people with the “green” code on a government smartphone app, indicating they have been given official clearance, will be allowed to leave the city for the first time since it went under lockdown on January 23rd.

But with the surge in asymptomatic cases in the city, officials on Monday revoked the “epidemic-free” status in 45 residential compounds, extending their restrictions indefinitely.

While doubt is often cast on official statistics in China, the Covid-19 figures would seem to be at least indicative of a positive trend, and scenes in hospitals, as well as the general mood on social media platforms and on the streets, suggest the national situation is under substantially more control now than it was some weeks ago.

Allowing planes and trains to run from Wednesday from Wuhan to other mainland Chinese cities, including the capital Beijing, is taken as a sign by many that the leadership feels confident the virus in now manageable on the domestic level and they can shift the focus to the flailing economy.

In efforts to stem a second wave of cases brought in internationally, officials said on Monday they would be strengthening measures at land borders with Russia and other neighbours after the number of overland infections recently exceeded those via airports.

It has already dramatically reduced flights into the country, and shut its borders to foreigners, including those with residence permits and valid visas. Most of the imported infections to date have been returning Chinese nationals who study or work overseas, officials said.

Facing international criticism that China was too slow to raise the alarm over the outbreak, state-run news agency Xinhua released a “detailed timeline” on Tuesday which it said showed how China took “the most comprehensive, the strictest and the most thorough prevention and control measures”.

An editorial introducing the report attacked “immoral” US politicians who were “playing blame games.”

“Lies and smears only waste time and endanger more lives,” it said.

1 Donald Trump is in trouble, and that could spell very bad news
2 O’Doherty and Waters ordered to pay legal costs of case against State over Covid-19 laws
3 House parties are being held ‘with abandon’, Holohan warns
4 Harris rules out early opening of hotels amid easing of lockdown
5 Some larger stores to reopen on Monday ahead of schedule
Real news has value SUBSCRIBE