Coronavirus: Infection peak may have passed, but death toll could hit 400 by May, report forecasts 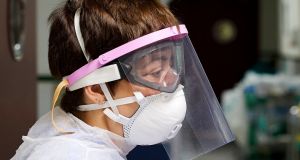 Ireland has passed its peak of Covid-19 infections but can expect a total death toll of more than 400 virus-related fatalities by next month, according to international modelling data published on Tuesday.

Peak resource use of hospital and intensive care unit (ICU) beds here passed on April 4th, while peak deaths passed on April 6th, according to the data published by the Institute for Health Metrics and Evaluation (IHME), which is based at the University of Washington in the US.

The research looks at the predicted spread and impact of coronavirus in 29 European countries and assumes social distancing measures will remain in place until August.

It predicts there will be more than 150,000 deaths in Europe during the “first wave” of the pandemic.

In relation to Ireland, it says there was “no overall bed shortage” on the peak date for resource use, but there was a shortage of 88 ICU beds. A shortfall of 125 ventilators was also forecast.

However, these calculations were based on the pre-pandemic availability of under 250 ICU beds in the State. This capacity has since been at least doubled, indicating a surplus of capacity under these modelling assumptions. The supply of ventilators has also been boosted.

A total of 401 deaths are forecast in Ireland by the start of May but none thereafter to August 4th, the end of the modelling period, according to the research.

However, NPHET officials in Ireland criticised the US research as unreliable.

“It’s not really a model. It just took existing case data and suggested that because things seem to have stabilised over a short number of days that perhaps we’ve reached a peak,” said assistant chief medical officer Dr Ronan Glynn.

“It doesn’t take into account any changes over the coming days or the highest number of deaths reported this evening.”

Dr Glynn said Irish modelling being led by NUI Maynooth president Prof Philip Nolan was using a more extensive range of paramenters and people should wait to see what comes out of this work.

Placing “undue store” in the US research could lead to complacency, he warned.

The study predicts 66,300 deaths in the UK, the highest number in Europe. The UK’s use of bed resources is predicted to peak on April 17th and its deaths on April 20th.

The research says the peak of the pandemic has passed in many European countries, including in Spain, Italy and France, where 19,209, 20,300 and 15,058 deaths are predicted, respectively.

The model used by researchers is based on the social distancing measures introduced in New Zealand and also assumes complete adherence to these measures.

The research also suggests the end of the first wave of the pandemic could occur by early June and says that whether a second wave occurs depends on what is done then to prevent Covid-19 being reintroduced.

“By the end of the first wave of the epidemic, an estimated 97 per cent of the population of the US will still be susceptible to the disease, and thus measures to avoid a second wave of the pandemic prior to vaccine availability will be necessary.

“Those nations hit hard early on implemented social distancing orders and may have the worst behind them as they are seeing important progress in reducing their death rates. Each nation’s trajectory will change – and dramatically for the worse – if people ease up on social distancing or relax other precautions.

“To decrease the risk of a second wave in places where the first wave is controlled by robust social distancing, governments would need to consider mass testing, contact tracing, and quarantines for those infected until a vaccination is available, mass produced, and distributed widely.”