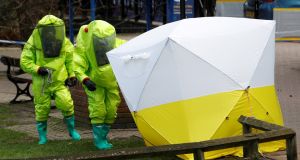 The forensic tent, covering the bench where Sergei Skripal and his daughter Yulia were found, is repositioned by officials in protective suits in the centre of Salisbury. Photograph: Peter Nicholls/Reuters

Britain’s home secretary has described the attempted murder of former Russian spy Sergei Skripal and his daughter, Yulia, using a nerve agent as a “brazen and reckless” act.

Amber Rudd told MPs that hundreds of police officers were involved in an investigation into the incident but she said it was too early to say who was responsible.

“The use of a nerve agent on UK soil is a brazen and reckless act. This was attempted murder in the most cruel and public way. People are right to want to know who to hold to account. But, if we are to be rigorous in this investigation, we must avoid speculation and allow the police to carry on their investigation,” she said.

“We are committed to doing all we can to bring the perpetrators to justice – whoever they are, and wherever they may be. The investigation is moving at pace, and this government will act without hesitation as the facts become clearer.”

Mr Skripal and his daughter, who were found last Sunday afternoon slumped on a bench outside a Wiltshire shopping centre, remain critically ill in hospital. A police officer, Nick Bailey, who was one of the first on the scene and who also fell ill, is now recovering and was able to talk with his family on Thursday morning. Mr Skripal was jailed in Russia for passing secrets to MI6 but was released in a spy swap in 2010, when he moved to Britain.

The Russian government has said it has no information about what led to Sunday’s incident, which British authorities have determined to have involved the use of a nerve agent. Britain’s head of police counterterrorism, Mark Rowley, said that both Mr Skripal and his daughter, who was visiting him from Moscow, were deliberately targeted.

“This is being treated as a major incident involving attempted murder, by administration of a nerve agent,” he said.

Police have not publicly identified the nerve agent that was used in the attack or its method of administration but Sgt Bailey’s recovery suggests that doctors know enough about the substance to treat it successfully.

Mr Skripal and his daughter remained in a critical condition on Thursday, however.

Ms Rudd said the investigation was focused on Mr Skripal’s home in Salisbury, a pub in the city where he and his daughter had been drinking and a restaurant where they had eaten before they fell ill.

Labour MPs have called on the government to investigate the suspicious deaths of 14 other Russians in Britain since 2014. Conservative Edward Leigh said there was no need to wait for the outcome of an investigation into last Sunday’s incident before strengthening Britain’s defences against Russia.

“The circumstantial evidence against Russia is strong – who else would have the motive and the means?” he said.

“Those of us who seek to understand Russia know that the only way to preserve peace is through strength. If Russia is behind this, it is a brazen act of war and humiliates our country.”