French maritime authorities said on Tuesday (January 22) that a light aircraft lost radar contact over the English Channel late on Monday (January 21), but could not confirm whether Cardiff City soccer player Emiliano Sala was on board. 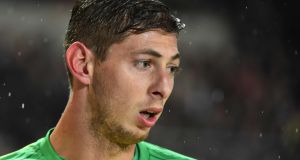 Rescue helicopters and lifeboats scoured the seas off the Channel Islands as French police sources confirmed the 28-year-old Argentine forward was on board the single-engine Piper Malibu which disappeared from radar screens late on Monday evening.

Sala joined Premier League strugglers Cardiff City from FC Nantes last week for a club record fee of about €17 million. He had played in France since 2012 and had signed a three-and-a-half year deal with the Welsh club after scoring 12 Ligue 1 goals in 19 appearances this season.

Guernsey police posted on Twitter on Tuesday morning that the search had resumed at 8am but that there was still no trace of the plane.

It read: “Searching for the light aircraft PA 46 Malibu resumed at 8am this morning. No trace has currently been found.

“It was en route from Nantes, France to Cardiff, Wales with 2 people. More info when available.”

A further update of the search read: “Aircraft Search: 10.20am update. There are currently two helicopters, two planes and one lifeboat searching. Further information as it is available.”

Sala’s father told Argentine TV channel C5N: “I didn’t know anything because I’m away from home, I’m a truck driver. A friend who saw it on TV told me. I’m in despair. I pray that this ends well.”

Nantes were due to travel to Entente Sannois for their Coupe de France clash on Wednesday evening, but the third-tier outfit have agreed to postpone the match until Sunday, January 27th.

A statement from Sannois’ official website read: “The round-of-32 Coupe de France match between Entente Sannois and Nantes initially scheduled for Wednesday, January 23 has been rearranged for Sunday, January 27 following the disappearance of the plane of the former (Nantes) player Emiliano Sala.

“Sannois wish all the best to Nantes and to the family of Emiliano Sala at this challenging time.

“The club is also thinking of all the people on board the plane.”

Sala, a native of Santa Fe in Argentina, played at youth level for Club Proyecto Crecer in his home country before being snapped up by French club Bordeaux in 2010.

He was then sent out on a series of loans to Orleans, Niort and Caen and after failing to make more than a handful of appearances for Bordeaux, Sala joined Nantes in 2015.

It was in Brittany that his career began to flourish.

Mr Sala’s hat-trick against Toulouse in October 2018 was the first by any Nantes player in Ligue 1 since 2006. –PA and Reuters