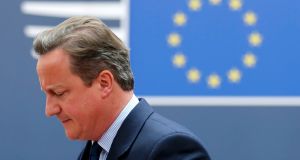 David Cameron at an EU Summit in Brussels in 2016. Photograph: Reuters/Pascal Rossignol

David Cameron never believed he would have to hold an EU referendum because he expected to fall short of an overall majority in the 2015 election, according to Donald Tusk.

The European council president said the then-British prime minister had told him he was relaxed about promising the referendum – which he had done to appease Eurosceptics in his party – because he thought he would again be in coalition with the Liberal Democrats, who would block any such move.

In an interview as part of a BBC documentary, Mr Tusk said: “I asked David Cameron ‘Why did you decide on this referendum, this – it’s so dangerous, so even stupid, you know?’. And, he told me – and I was really amazed and even shocked – that the only reason was his own party.”

Mr Tusk’s remarks, which echo long-standing suspicions that Mr Cameron never intended to hold a referendum, were immediately disputed by Craig Oliver who was Mr Cameron’s director of communications in Downing Street.

He tweeted: “This is completely wrong. David Cameron spent the whole of the 2015 election campaign making clear he would not lead any form of government that didn’t have a referendum. Look at almost any interview he did. The coalition as ‘excuse to bail’ is a myth.”

Mr Tusk also said he warned  Mr Cameron that his decision to hold the referendum was “stupid”.

He said he also warned him that his attempt to secure a deal on free movement of people before the poll was doomed to fail.

In the documentary, Inside Europe: 10 Years of Turmoil, Mr Tusk said: “I told him bluntly ‘Come on David, get real’. I know that all prime ministers are promising to help you, but believe me the truth is that no one has an appetite for revolution in Europe only because of your stupid referendum.

“If you try to force us, to hurry us, you will lose everything. And for the first time I saw something close to fear in his eyes. He finally realised what a challenge he was facing.”

Mr Tusk also recalls a telephone conversation with Mr Cameron during which he learned he was going to resign.

“David Cameron called me and he informed me that he’s ready to resign,” Tusk said. “I said, ‘Yes David, it would be very difficult even to imagine that a prime minister who was the leader of remain’s campaign would be just two days later a prime minister negotiating Brexit.’ It was like his day of reckoning was coming, reckoning for his biggest mistake in his life.”

Mr Osborne, who was chancellor at the time, warned against a gamble that could be a “disaster for Britain”, but Mr Hague believed there was no other option.

“This was coming. Either we had to lead that or be the victims of it,” Mr Hague said.

The former French president François Hollande discloses how, after dinner during an overnight stay at Chequers in September 2015, he tried to persuade Cameron not to hold the referendum.

“Nothing obliged him to hold the referendum when he did,” Mr Hollande said. “This would not be the first time that a commitment made at an election had not been kept afterwards, but he wanted to show he could negotiate successfully with Europeans.”

The first part of Inside Europe: Ten Years of Turmoil is on Monday, January 28th, BBC Two, 9pm. – Guardian