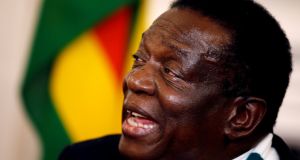 Zimbabwe’s president, Emmerson Mnangagwa, has called for a “national dialogue” and promised an investigation into widespread violence by security forces in recent days, after cutting short an overseas trip.

The brutal crackdown followed protests last week against a doubling of the fuel price, which led to rioting and sporadic looting.

The military and police appear to have targeted officials and supporters of mainstream opposition parties as well as union officials and high-profile civil society activists, rather than alleged thieves.

At least 12 people were killed and 78 treated for gunshot wounds, according to the Zimbabwe Human Rights NGO Forum, which recorded more than 240 incidents of assault and torture. About 700 people have been arrested and remain in custody, including five opposition MPs.

On Tuesday, the government-appointed Zimbabwe Human Rights Commission issued a highly critical report, saying at least eight people had been killed and that soldiers and police had instigated “systematic torture”.

It said armed soldiers and police had visited many homes at night to give “indiscriminate beatings” to men and boys as young as 11. “Torture was perpetrated through beating the men with baton sticks on their backs while they lay on the ground,” it said, adding that attack dogs were used and victims were often too scared to seek medical attention.

The violence was the most extensive since the 37-year authoritarian rule of Robert Mugabe ended in November 2017 with a military takeover, and has dashed any hopes for political reform.

Mr Mnangagwa returned to Harare on Monday night, curtailing a visit to Europe and central Asia to drum up investment.

Human rights organisations said raids were continuing in the early hours of Tuesday, though internet and social media sites appeared to be partially returning to normal after being shut down by authorities for several days.

There was also more traffic in the centre of major cities, though a significant number of soldiers remained on the streets.

Mr Mnangagwa, who won contested elections in July, said insubordination among security forces was intolerable and “if required, heads will roll”.

“Violence or misconduct by our security forces is unacceptable and a betrayal of the new Zimbabwe,” the 76-year-old ruling party stalwart said in a statement released on social media. “Chaos and insubordination will not be tolerated. Misconduct will be investigated.”

“Everyone has the right to protest, but this was not a peaceful protest. Wanton violence and cynical destruction; looting police stations, stealing guns and uniforms; incitement and threats of violence. This is not the Zimbabwean way,” said Mr Mnangagwa, who has been advised on his communications by a team of international consultants.

Opposition officials were unimpressed by the president’s offer of dialogue which they called a “gimmick to buy time”.

“Mnangagwa’s overtures are always on Twitter. He knows where we are, yet he has chosen not to talk to us directly,” Jacob Mafume, a spokesman for the opposition Movement for Democratic Change (MDC), said.

Nelson Chamisa, the leader of the MDC, said his attempts at dialogue had been “spurned and mocked” and that people must be free to talk without fear.

Mr Mnangagwa also defended the raising of fuel prices, saying it was “not a decision we took lightly. But it was the right thing to do”.

Fuel in Zimbabwe is heavily subsidised and officials have said the money saved by the price rise will be redirected to buying essential commodities. The protests were stoked by chronic daily shortages of banknotes, fuel, food and medicine.

Mr Mugabe’s rule left Zimbabwe with vast debts, a crumbling infrastructure and soaring unemployment, especially among young people. Most of its 16 million people live hand-to-mouth, or survive on remittances from the extensive diaspora. Inflation has hit 40 per cent.

Mr Mnangagwa had visited Russia, Belarus, Azerbaijan and Kazakhstan before cutting short his trip, which had included attending the Davos summit of world leaders this week.

After Mr Mugabe’s rule ended there was widespread optimism that the repression of previous decades was over, but any hopes of political reform have been extinguished. The crisis has attracted fierce criticism from western states, and will undermine Zimbabwe’s efforts to rejoin the international community.

The US, UK, EU and the UN human rights office criticised the government’s reaction to the unrest.

The army and police denied any wrongdoing, saying some of those who raided homes and beat people were impostors wearing stolen uniforms.

Analysts are divided over whether the crisis provides further evidence of splits within the ruling Zanu-PF party and the government’s highest officials.

The vice-president, Constantino Chiwenga, a hardline former army general, was in charge while Mr Mnangagwa was away. He was blamed for deploying soldiers who shot six civilians in Harare two days after elections last year.

Some observers believe Mr Chiwenga is impatient with the more moderate line taken by Mr Mnangagwa, who they say is keen to win international legitimacy.

The high court in Harare ruled on Monday that the government had no powers to shut down the internet and ordered it to be restored. – Guardian